Top sights and activities in Chambéry 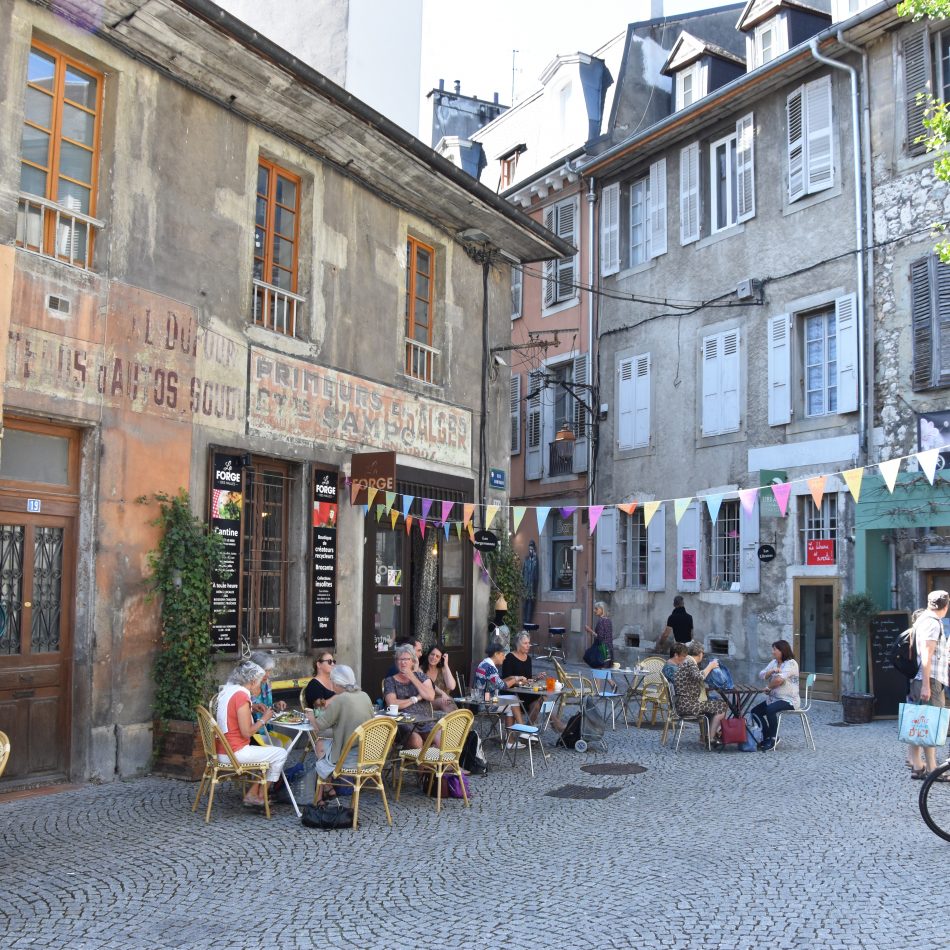 Chambéry is a lovely town in the Auvergne Rhone-Alpes region in France. It’s part of the former Savoie Mont Blanc region. There’s a small river that meanders through the town. Just like in Amsterdam, Chambéry is build on poles. On this page I’m telling you about the top sights and activities in Chambéry. And I’ll also tell you about my favorite restaurants and food spots in Chambéry.

Chambéry is mostly known for its Castle and the beautiful region surrounding the town. Chambéry has been part of France since 1862, before that it was part of Italy. Hence you’ll see many Italian influences in the kitchen of this area.
Speaking of food from Chambéry. Did you know that chocolate truffles were invented here?

The whole culinary world in France and beyond knows La Formation Meilleur Ouvrier de France (MOF). It’s a competition between professionals in all kinds of categories. There are 17 categories and they’re mostly known for their food awards. The preparations take months or even years; and once you get the award it shows that you’re one of the best in your categorie.

The ‘Hotel de Ville’ (Town Hall) in Chambery is very picturesque and quite Instagrammable too. This pink and white building dates back to 1863.

La Fontaine des Elephants, the Elephant fountain, became a symbol for the city of Chambéry. The cities symbol animal is an elephant because of the fountain. The 18 meters high statue was made in 1838 to honor a general who went to the East Indies.

The streets of Chambéry

Chambéry has wonderful, charming streets. Make sure to leave some time in your program to just walk around. The small side streets are the most charming.
This beautiful picture of me is made by talented photographer Nap from Just Nap Here.

Boigne Castle is a beautiful pink building located in The Buisson Rond Park. The park is 22 hectares and was created in 1810. The city of Chambéry bought the park in 1971 and created a rose garden with over 6.000 rose bushes. You can find it in the South-Eastern side of the town.

Le Grand Joseph is a restaurant in the city center of Chambéry. From their terrace you’ve got perfect views of the Ducs de Savoie castle. They’re open for lunch, dinner and drinks. They’ve also got great vegetarian options at Le Grand Joseph.

Marché des Halles is a market in Chambéry that’s open on Tuesdays to Saturdays, from 7am to 1pm. There’s a part of the market that is covered and there’s a part on the streets.

Bottí Fruits, right at the entrance, is a great spot for fruit or fresh juice. They’re a member of the Meilleur Ouvrier de France I told you about, so you know their fruit and fruit products are from high quality.

There’s a good bakery all the way in the back of Marché des Halles, called La Boulangerie Savoyarde. Everything in the bakery is organic.

Cedric Pernot is a chocolatier in the centre of Chambéry. And it’s a good one too! He’s part of Relais Dessert, an organization of 100 of the best patissiers in the world. (Pierre Hermé, from the macarons, is also member). The specialty of Cedric Pernot is a raspberry macaron cake and his chocolates. But the pastries are also works of art. You won’t know where to look and which one to choose when you walk into Pernots shop. All the pastries are beautiful and delicious.

La Forge des Halles is a wonderful little restaurant. They prepare a different dish every day, depending on what they got at the market. This means you’ll get a colorful dish filled with good food. They want to reduce the food waste as much as they can, that’s why the menu changes daily. A vegetarian option is always available.

Comtes de Challes ia hotel and restaurant located in a castle. You can find it in Challes les Eaux, a small town right next to Chambéry. The hotel rooms are lovely decorated in the style of the castle.
The restaurant of Comtes de Challes is listed in the Gault et Millau and Michelin guide. So besides a very romantic setting, it’s high quality dining as well.

Looking for a nice hotel in Chambéry? Hotel des Princes is very centrally located. This family-run hotel is located right next to the Elephant fountain. There’s free wifi in the whole building and a nice breakfast buffet for the hotel guests. Hotel des Princes had a nice spa area with a jacuzzi, sauna and steam room.

The mountains around Chambéry

There are different walking routes from the town of Chambéry into the mountains. They take about an hour to go up and aren’t accessible by car. I recommend that you rent bikes and discover the mountains by bike.

At Synchro, next to the train station, you can hire rental bikes. The most relaxing way to discover the area is by e-bike. Make sure to stop many times along the way, because the view is amazing.

In the Chambéry area grow 23 grape variaties, of which 8 are unique. No other region in France has so many different grapes. The perfect area for some wine tasting I would say.

A great destination to cycle to with your e-bike is Jean François Marechal. At this winery you can have a wine tasting with the most beautiful view. Their Crémant de Savoie was my absolute favorite. But it’s hard to choose as all their wines tasted great. Jean François grows his own grapes, cultivates them, vinificates them and even sells the wines himself.

Don’t want to cycle back after all those wines? You can also spend the night at their charming gîte (cottage).

Click here to read more about the Auvergne-Rhone-Alpes region.