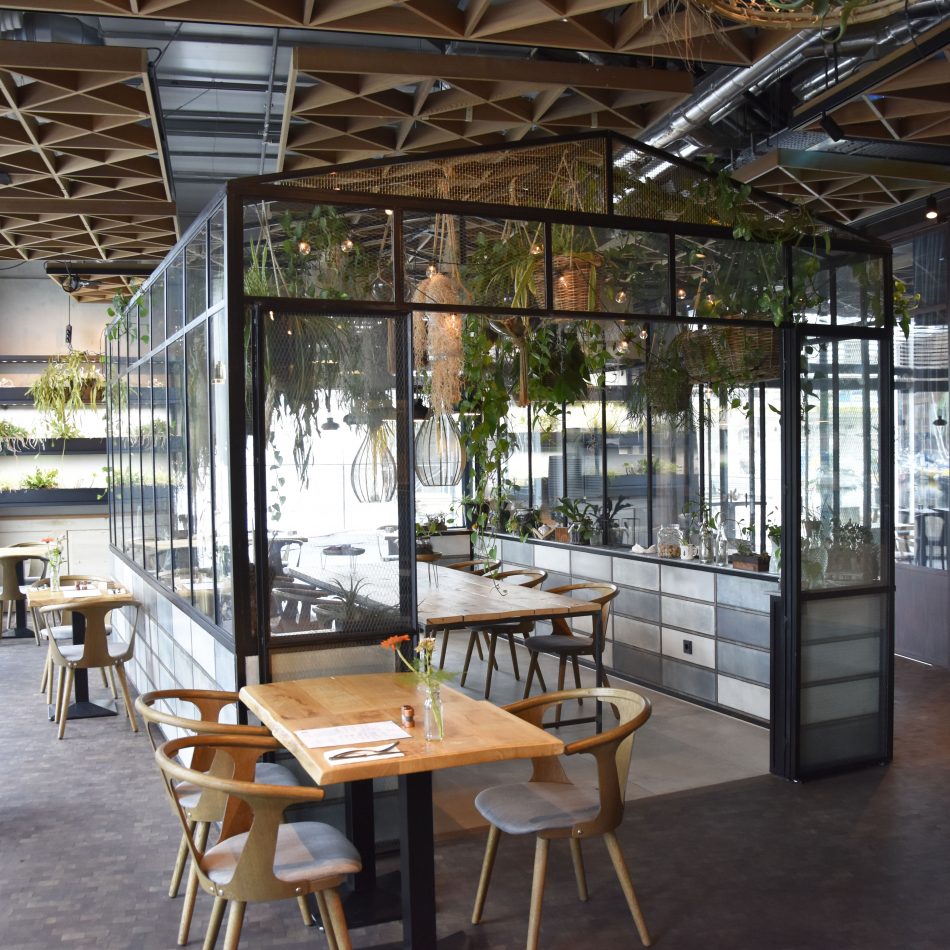 The Four Elements Hotel is a four star hotel located at the IJmeer lake in the IJburg neighborhood. There’s a direct tram from Amsterdam Central Station to IJburg (line 26). The hotel has 10 floors and 195 rooms. Besides the hotel rooms, it has a restaurant called Herbs Garden and a skybar called Wind. Both are open for non-hotel guests as well, I’ll tell you more about them later.
The hotel opened as Hotel Breeze in 2019, but is now renamed to Four Elements Hotel.

There are several types of rooms at the Four Elements Hotel Amsterdam. But all rooms have a comfortable bed, a coffee and tea machine and a bathroom with a shower. Each room has at least one window with a beautiful view over the IJmeer or the IJburg harbour, canal and neighborhood. The beddings are allergy friendly and the rooms are clean.

When I stayed at the Four Elements Hotel it didn’t feel different from another four star hotel. I had everything I need in my room. It had all the comfort of a luxury hotel. It didn’t feel like I was missing anything because of is sustainability goals. So I asked the manager what it is that makes the Four Elements Hotel energy neutral. It turned out that the hotel is filled with ingenious techniques.

The building itself is designed by Dr Bronsema who studied termite hills and wondered how they can stay cool during hot African days and warm during colder nights. The same natural air conditioning technique was used for this hotel, and it’s the first hotel in the world to do so. This wonderful piece of engineering makes that they can capture fresh air in a cascade where it can be cooled or heated in a natural way before it’s ventilated through the building.
Besides the element wind, they also use the power of the sun at the Four Elements Hotel. You might not see it at first, but the entire building from the first floor up is covered in solar panels. Excessive energy is stored underground for later use.

And besides these fundamental aspects, they also focus on sustainability on a smaller level. Most of the furniture is made of previously used materials, and the big table in the meeting room is made from plastic that was fished out of the canals.

The Four Elements Hotel Amsterdam received the EZK Energy Award for excelling both in terms of sustainable energy generation as well as energy saving. And it’s got the BREEAM certificate. BREAAM is the world’s first sustainability assessment method for buildings. They also got an award for their elevators, that work as a dynamo.

The Four Elements Hotel Amsterdam doesn’t have a breakfast buffet, as that always makes for much food waste and that’s not sustainable. Instead, they have an a-la-carte breakfast menu. For a fixed price you can order as many dishes as you like. Unlimited coffee and tea is included. Many of the dishes are vegetarian and vegan, as eating plant-based is more sustainable. I went for the vegan pancakes with red fruit and the vegan yogurt with granola.

On the ground floor of the hotel you can find the Herbs Garden Restaurant. The restaurant is open for hotel guests, but also for regular lunch or dinner guests. Even if you’re not staying at the hotel, I recommend having lunch or dinner at Herbs Garden Restaurant.
The design of the restaurant is wonderful, with wooden pre-used furniture and plants hanging from the ceiling. But the food is also superb. There are many vegetarian and vegan dishes on the menu of Herbs Garden Restaurant Amsterdam.
Almost every ingredient in the kitchen comes from Dutch soil to make the menu as sustainable as possible. This means that the menu changes every season and is dependent on what the Dutch farmers have to offer. They’ve got a herb garden on the terrace and they only sell European wines.

I had a burrata salad with tomatoes as a starter, tagliatelle with homemade pesto as a main and brownie with vanilla ice cream for dessert. They also have a nice vegan risotto and a good vegan burger. But don’t worry if you’re a fish or meat lover, they have that on the menu too.

Click here for my favorite vegan food spots in Amsterdam.

Every Wednesday to Sunday the Wind Sky Bar is open for visitors and hotel guests. Located on the 10th floor of the Four Elements Hotel Amsterdam it has beautiful views over the IJmeer lake. It has a very Instagrammable interior design and lovely cocktails. Even on the drinks menu you can see the sustainability goals of the hotel, as they have many licors from the Netherlands. So why not try a Dutch wine or a Dutch whiskey?

Click here to book your room at the Four Elements Hotel Amsterdam.