Explore the Halkidiki region in Greece 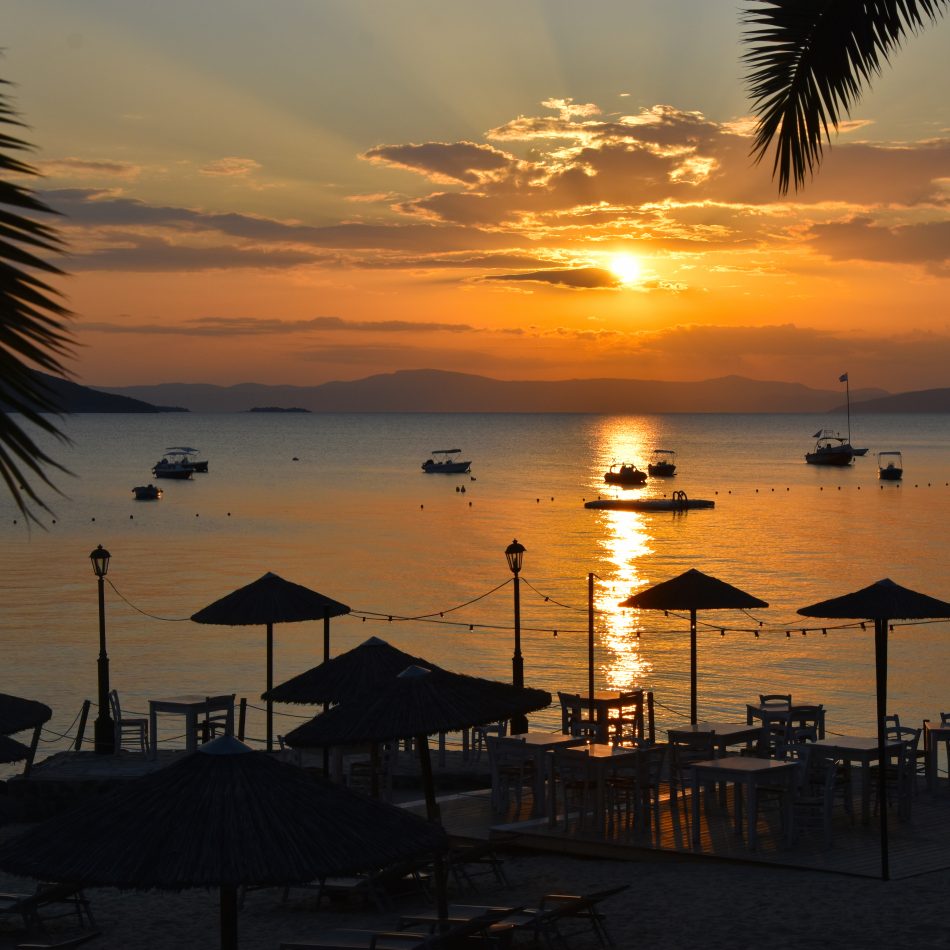 When you think of Greece, many people only think of the Greek islands like Crete. I also had the image of the Greek mainland being less attractive. I thought of hot summer days and the absence of beaches. But then I found out about Halkidiki. Halkidiki is an area on the mainland of Greece, but it has 3 peninsula’s and therefore a long coastline. After I explored the Halkidiki region in Greece I became super enthusiastic. On this page I’m telling you all about the top sights and activities in Halkidiki. It might be your new favorite part of Greece!

Halkidiki is an area in the North East of Greece. It’s right to the South East of Thessaloniki, the 2nd biggest city of Greece. Thessaloniki has an airport that has direct flights to and from many cities in Europe. In the Netherlands you can fly from Amsterdam and Eindhoven to Thessaloniki with direct flights.
Halkidiki has 3 peninsula’s and it also contains the mountain area North of them. Because of the 3 peninsula’s (or ‘legs’) you’ll have plenty of coastline. As a matter of fact it has the longest coastline of Greece. It stretches over 550 kilometers and has more than 1.000 beaches! So you might not be on an island, but you’ve got the feel of being on one. You actually get 3 islands for the price of one.

The touristic season in Halkidiki runs from the end of April to the end of October. Many hotels and restaurants are closed from November 1st until the beginning of April. As July and August can get quite busy (many Greeks also like to spend their summer in Halkidiki), I recommend that you go in May, June, September or October. The weather in Halkidiki is nice from April to October. I was there in October and we had a lovely temperature of 22°C on average, that felt like 26-28 degrees.

Although tourism is a big sector in Halkidiki, it also produces many products. As there’s much water in the area, you’ll be able to get fresh fish at many places. But there are also many olive trees for olive oil or beauty products using olive like soap or body milk. There are several farmers who make thick Greek yogurt from their own sheep or cow milk. And Halkidiki produces 40% of the honey in Greece. They even have many different flavors of honey; depending on the direct environment of the beehives. Chestnut and pine honey are my favorites.

Click here to read more about local products of Halkidiki.

Of the three ‘legs’, the first one (Kassandra) has the most accommodation. It’s the most developed peninsula of Halkidiki. The second leg (Sithonia) has beautiful nature and is a less touristic than the first leg. A large part of the the 3rd leg is covered by Mount Athos. A sovereign state that houses 20 monasteries. This part of the peninsula isn’t accessible for women. But the first part of the peninsula is great to visit and it houses my favorite accommodation in Halkidiki: Eagles Resort. They have two section the hotel Eagles Palace and private villas at Eagles Villas. We stayed in a hotelroom in Eagles Palace and it was just incredible. We had a comfortable room with 2 bathrooms and a spacious balcony with sea view.

Arnea (sometimes spelled Arnai or Arnaia) is a beautiful old town in the North East of Halkidiki. I absolutely recommend a visit to Arnea. It’s a lovely town to walk around in and there are some nice activities to do.

Ammouliani is an Island located between the 2nd and 3rd leg of Halkidiki. It’s the most populated island in the Macedonia region of Greece. From the 3rd leg you can take a ferry to Ammouliani. It will only cost you 5euros and 10 minutes to cross the water. On the island you can visit one of its beautiful beaches or have lunch at Restaurant Tzanis.

As I said, Mount Athos is an area in Halkidiki that houses 20 monasteries. It’s a very unique piece of land that I don’t think you can find anywhere else on earth. You can’t visit the island as a woman and men also need permission of a monastery before you can enter (click here to read more). Luckily you can book a cruise with Athos Sea Cruises to see several of the monasteries from a boat.

Ouranoupoli is the last town on the peninsula before you’re entering Mount Athos. From Ouranoupoli cruises around Mount Athos depart. There are several nice shops and tavernas in the town. My favorite restaurant in Ouranoupoli is Kokkinos. At Restaurant Kokkinos they work with the 5 elements. You might know the 4 elements (earth, fire, wind and water), but Aristotles, who was born in Halkidiki, added the 5the element Aether. You’ll get a 5 course menu and each dish is inspired by one of the elements.

Click here for all my travel blogs on Europe.