The 10 most Instagrammable spots of Hamburg 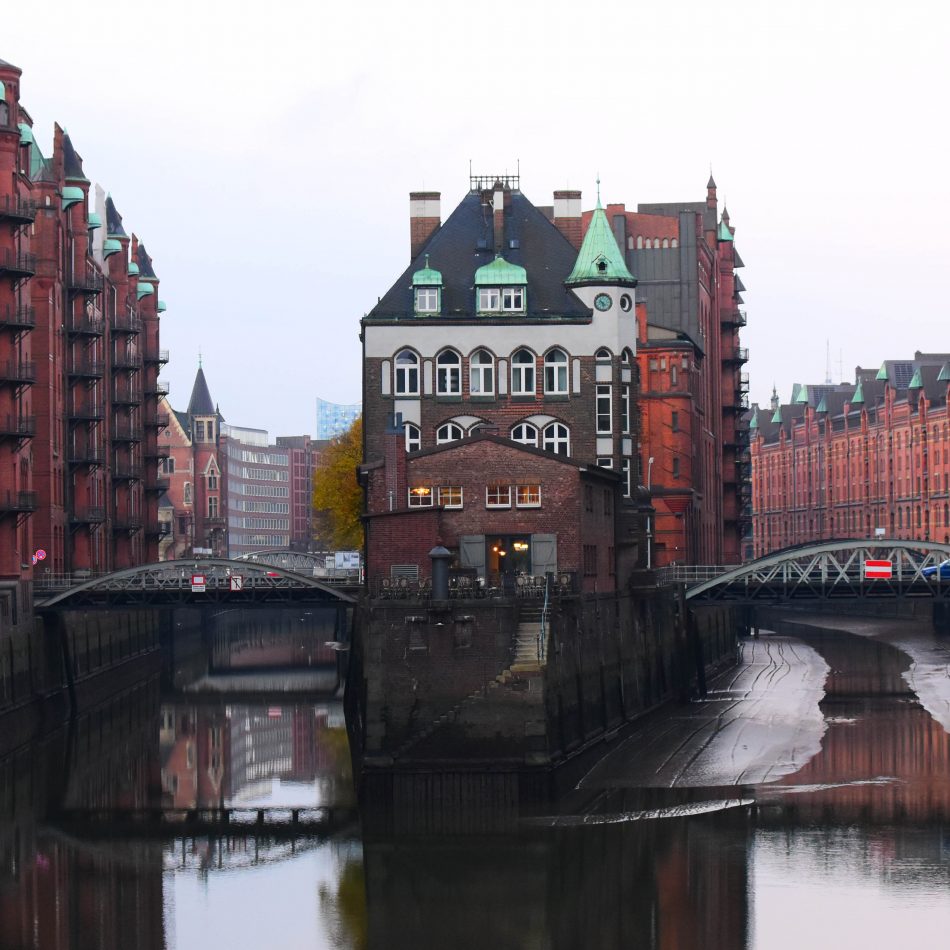 Hamburg, Germany’s second biggest city, has quite a few Instagrammable spots. There are several places in Hamburg that are particularly nice to take a photogenic picture that will do great on your Instagram account. On this page you can find all the top Instagram sights in Hamburg with a description on where to stand to take this specific picture. These are the 10 most Instagrammable spots of Hamburg. The Elbphilharmonie has only opened up in 2017 but is already one of the most iconic buildings in Hamburg. When you’re looking for pictures of Hamburg, the second biggest city of Germany) you’ll see the Elbphilharmonie on many of them. It’s one of the most Instagrammable buildings of the city. And rightfully so, it’s a beautiful architectural masterpiece.
Most people take pictures of the building from in front of the main entrance, but I think this side is much prettier. Here you see the original shape of the building best and it gives a nice image with the water on both sides. The trick to take this good picture of the Elbphilharmonie is to take the boat. You can get  on the number 72 ferry right next to the concert hall. The ferry is for free if you have a Hamburg Card.
Click here for exclusive behind-the-scenes pictures of the Elbphilharmonie.

2 the most Instagrammable building of Harbour City The Harbour City area (Hafencity) of Hamburg is very photogenic and you’ll see many pictures of Hamburg that are taken here. One of the buildings that you’ll see most is this very Instagrammable building surrounded by water with two bridges on either side. It might be a bit difficult to find however because most websites will only say that it’s in Harbour City but they won’t tell you the exact location. Luckily I’m here to help you out! This building is called Wasserschloss (water castle) and it houses a restaurant and tea office where you can discover 250 teas from all over the world. This iconic shot of the Wasserschloss in Speicherstadt is taken from a bridge opposite the building. If you also want to take this Instagram worthy picture, you should stand on the Poggenmühlen brücke (bridge). The oldest tenant of a warehouse in Harbour city is housed in a very Instagrammable building. Hälssen & Lyon is a tea importing company that’s been around since 1879. The Speicherstadt is now Unesco world heritage site so you can be sure that this beautiful building with its green doors and golden letters will be there when you visit Hamburg next time. Although the teas are not blended here anymore, it’s still the headquarters of Hälssen & Lyon. There’s one more very Instagrammable building in Hafencity and that’s this one. It’s the headquarters of the Hafencity Zeitung newspaper and it’s a beautiful building to photograph in every season. I was there in autumn when the light gave the building a nice red beam. The building is located at the St Annen platz square, but for the best pictures you go to the Bei St Annen bridge. St Michael’s church is the most Instagrammable church of Hamburg. Build in 1912, St Michael’s church is located in the city center of Hamburg, next to the main road Ludwig-Erhard Straβe. The tower is a 132 meters high and can be seen from many points in the city. But the real draw is the interior. High white walls, a lot of marble and golden elements. The large church can fit 2500 people and the altar is 20 meters high. Park Planten un Blomen is a large park in the middle of Hamburg. There are several area’s that make a nice Instagram picture. There’s a Japanese Garden, a Rose Garden and a tropical greenhouse complex. Spring and summer are good spots because everything is in bloom, but you can also take great pictures from November to March when the Ice Rink in the park is up. The Ice Rink is over 4000 square meters and one of the largest in Europe. From May to September there’s a 30 minute light show starting at 10pm with colored fountains and music. Did you know that Hamburg is the city with the most amount of bridges in the world? It has 2300 bridges, that’s more than in Amsterdam or Venice. So if you want a nice bridge picture on your Instagram feed, there are plenty of options in Hamburg. This one was taken at Oberhafenbrücke, right next to Hafencity.

My friend Gabriela from I am Foodie Traveler took this picture of me. Click here to read her Hamburg blog. There are few things more Instagrammable than a food flatlay. In Hamburg the best spot to get such a picture is at Hotel Tortue. They have a very extensive breakfast that you can also book if you aren’t staying there. For a fixed price you can choose as many dishes of the menu as you’d like and you can add all kinds of treats from the buffet like croissants and macarons.
Click here to read more about Hotel Tortue Hamburg. In a city with over 2000 bridges there’s also a lot of water but if you’re after a great reflection shot for your Instagram account you might be disappointed. As the water of the rivers is flowing, there isn’t a really good opportunity for such a shot. Except for the spot where I took this picture, here the water isn’t flowing so when there isn’t too much wind you can take this reflection picture. I took it near St Nicholas Church, if you walk right past it on the Willy-Brandt-Straβe to the Domstraβe you’ll see this water. It’s the end of the Nikolaifleet and as it’s the endpoint there’s no stream.

Click here for my favorite food spots in Hamburg.