My pregnancy: the first trimester 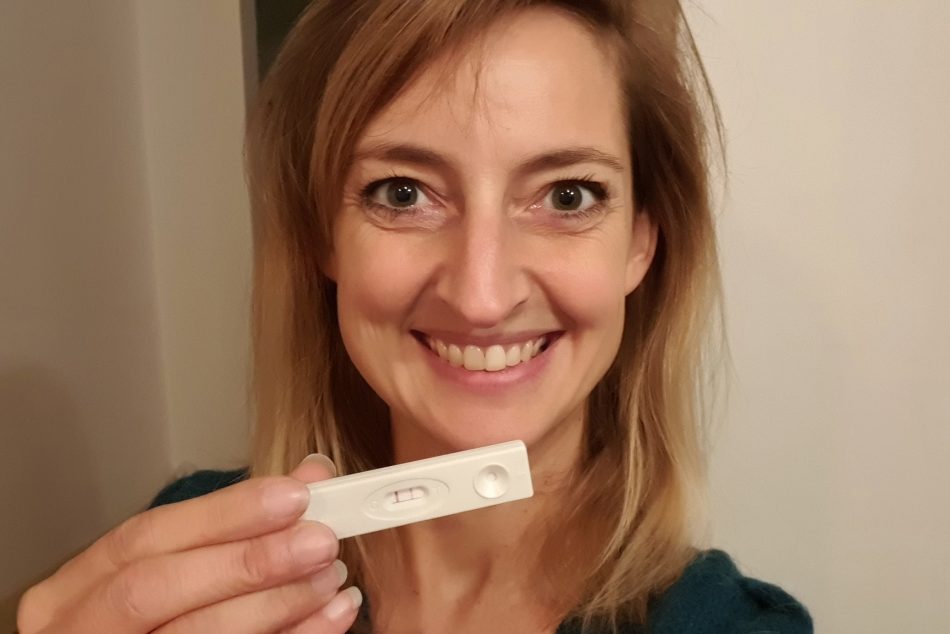 As I told you the other day, we’re having a baby! On my blog I’ll keep you posted about my pregnancy. Today I’m telling you all about the first 12 weeks of my pregnancy: the first trimester.

The first four weeks are actually a gift. Because by the time you discover that you’re pregnant, you’re already at least 4 weeks in. The first day of your missed menstruation is the start of week 4. Your egg was fertilized two weeks before, but as they don’t know the exact date they start the count at the first day of your last period. I wanted to get pregnant for quite a while so I kept a close eye on my cycle. That’s how I already found out at the beginning of week 4 that I was pregnant. I was so happy to see the second line appear on the pregnancy test. It was almost unbelievable.
The picture at the top of this page was taken right after I discovered that my test was positive.

Eelco was actually abroad for work when I took the test. Because I didn’t want to tell him over the phone, I had a few days in which I was the only one who knew that I was pregnant. I ordered white All Stars in his size, my size and a baby pair. I put the baby shoes in the box of his shoes and gave it as a present. It was such a special moment to tell him that he’ll be a father.

These weeks of the first trimester are so strange. We had the positive pregnancy test, but other than that it’s all still very abstract. We didn’t tell anyone yet, because we first wanted to wait until the first ultrasound at 8 weeks. So I had to keep it a secret from my parents and friends. I never lie to people so it was quite strange to keep it a secret. But as we didn’t see the baby or hear the heartbeat yet, it was also unreal for us, so it didn’t really feel like I was hiding anything.

What I did buy straight away was the book Eet als een Expert Zwanger. I love the books of the Eet als een Expert series as they only give scientific proven information about nutrition but in a very unsterstandable way. The book is great if you want more advice on what you can and can not eat during your pregnancy and it also gives you practical tips and recipes.

Many women experience pregnancy complaints during their first trimester. I have to say that I was very lucky. I hardly felt nauseous and I never had to throw up. I did have less of an appetite. Which is quite annoying when you’re a food blogger. I didn’t feel like making recipes at all!
And I noticed that I was more tired. But as the restaurants were closed anyway because of Covid, I didn’t miss much and just went to bed early.

I did notice that my body was changing! So I got pregnancy oil straight away, not only for my belly but also for my breasts. I went for the new Pregnancy Belly Balm and Body Oil from Naïf care. It has shae butter and argan oil, two ingredients of which I heard that they work best for elasticity and against striae.

When I was 8 weeks pregnant we had our first ultrasound. It was such a relief to see that little creature with a heartbeat. In the back of my head I did keep in mind that something could be wrong, also considering I’m not the youngest anymore. So I was very happy to see that all was well. I was in love with that tiny human being straight away!

In the days after the 8 week ultrasound we told our parents, Eelco’s sister and my brother. We already had family meetings scheduled as it was Christmas time. It was so nice to finally share the news with people. And it was heartwarming to see their responses. My parents were over the moon. Ever since we told them they’re super involved. They want updates about everything and already fantasise about how their life will be with 3 grandchildren (my brother has two little girls). I gave my parents this little box with wooden food toys from HEMA, so that the ‘mini travel foodie’ could play with it when we’d be visiting.

Weeks 8 to 12 are also the weeks in which most women have the most pregnancy complaints. I was still very lucky! The only thing I had was that I often had a bad taste in my mouth. Someone on a forum described it as a metal taste, and that’s quite an accurate description.

At 12 weeks we had our second ultrasound. I’m telling you all about it in my blog about my second trimester.