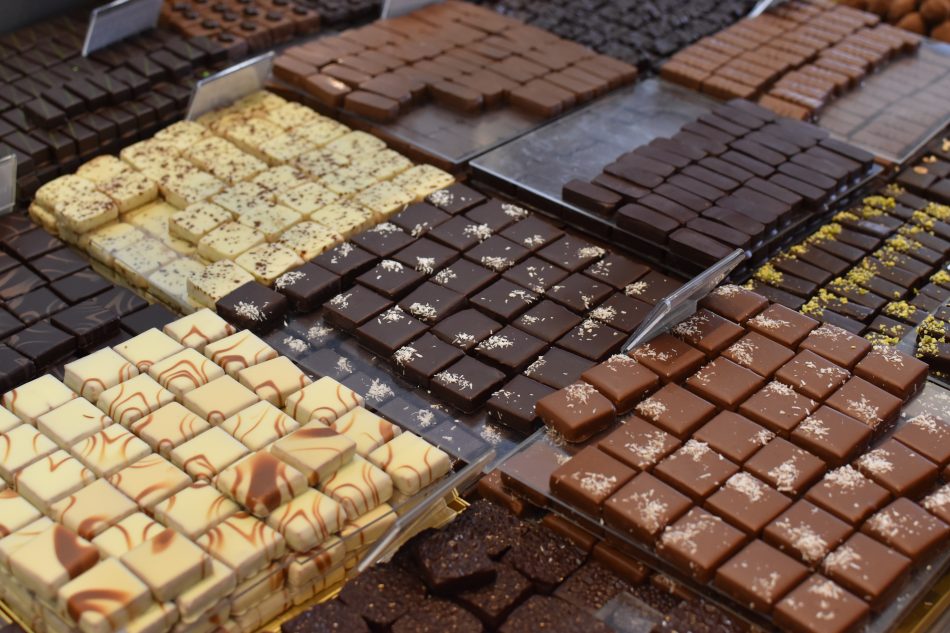 During our road trip in the Ardèche we also stopped in Aubenas. Aubenas is a relatively big town in the center of the Ardèche region. It’s mostly known for its weekly market on Saturdays, but there’s a very good reason to visit Aubenas any other day of the week as well. That reason is called Pierre Chauvet. Chocolaterie Pierre Chauvet in Aubenas is definitely worth a visit.

Pierre Chauvet has been making chocolates for over 15 years. He’s sometimes called a chocolate goldsmith and I understand why! His chocolates are real gems. There’s always something to taste in his shop in Aubenas and I can guarantee that you won’t leave empty handed because there’s something sweet for everyone’s taste.

Pierre Chauvet mostly known in the region for his version of Mille Feuille made with chocolate leaves instead of puff pastry. He sells this chocolate sheets in all kinds of flavors and colors. You can buy a box with 5 or 8 sheets that make a great gift.
But in his shop in Aubenas he sells all kind of other chocolate creations too.

At Pierre Chauvet they also sell delicious home made ice cream in all kinds of flavors. And, all-round artist Pierre Chauvet also makes macarons.
For each holiday or celebration they make special pieces. Like chocolate flowers for Mother’s day and of course you can go crazy during Easter and Christmas!

Besides in Aubenas, they also have a shop in Valence. If you live in France you can also order the chocolate creations of Pierre Chauvet in their webshop.

Click here to read all my blogs on France.