My favorite vegan restaurants in Amsterdam 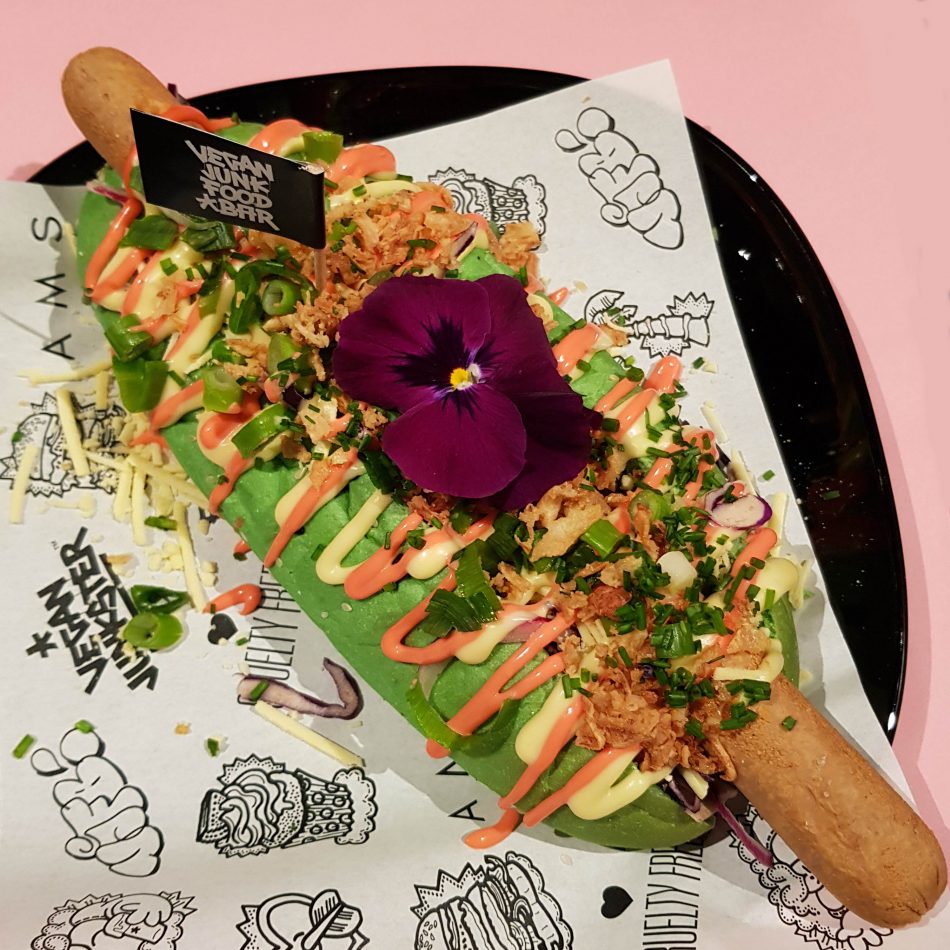 Deer Mama is a vegan milkshake and burger bar in Amsterdam. You can find the vegan mylk and burger bar in De Pijp area, right next to the new metro stop ‘De Pijp’ (line 52). The main focus of Deer Mama is vegan milkshakes and vegan burgers, but you can also get other colorful vegan dishes, vegan soft serve and several vegan cakes and cookies there.

Toost Amsterdam offers 100% vegan catering and food packages. You can hire them for your party or meeting, but they also make vegan picnic packages. Here you see a vegan picnic package from Toost with bread sticks, vegan feta, tofu balls, beet spread, green pea spread, tapenade and much more.

Koffie en de Koeck is a little heaven for vegans. This all vegan restaurant near the Westerpark serves breakfast, lunch and high-tea’s from Tuesday to Saturday. Besides that everything is 100% vegan, they also work with as many organic ingredients as possible. Their vegan cream cheese is delicious and the sweet potato hummus with dukkah (Egyptian nuts and spices) is a must-try! Pictured is the gluten free corn cracker club with avocado and grilled bell pepper.

The name Meatless District already suggests that there is only no meat on the menu, but this restaurant is 100% plant based! Everything on their menu is vegan and they have some delicious options for either lunch or dinner. For lunch you can go for one of their big sandwiches, like the one I had (pictured) with walnut and mushroom pate, cucumber, mango chutney and crushed walnuts. They also serve dinner, their MD burger is famous! They’re located at

Very close to Meatless District you can find Soil. Soil is a plant-based cafe. They’ve got the delicious beyond meat burger with several toppings and they’ve got vegan salad bowls too. Their seasonal bowls are also a great recommendation. They menu changes every few months, but they’re always nice. Last time I was there they had a great peanut butter curry.

Vegabond is a vegan lunchroom meets vegan supermarket, making it the perfect stop for all vegans in town. They’re located at De Clercqstraat in Amsterdam West. Their lunches are delicious (vegan cheese!) and the mini supermarket is great for getting the not-so-usual vegan products like silken tofu, vegan cheese en even vegan whipped cream.

Roots is probably best known for their organic cold pressed juices. But I’m not a juice person, I prefer to eat my calories. So I go there for their wraps, salads and mostly: their desserts! They sell the raw treats from Holy Nut. They are raw, organic, sugar free, dairy free and paleo friendly. But still super tasty! My favorite is the Chocolate Salted Caramel slice (pictured on the right). You can find Roots at the Amstelveenseweg in Amsterdam Zuid.