Vegan Ben & Jerry’s in the Netherlands 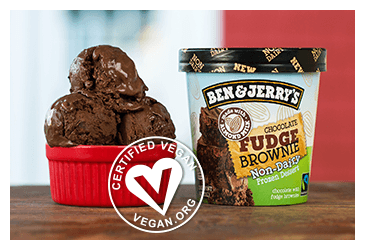 The wait is over! As of next Tuesday (January 30) Ben & Jerry’s will sell vegan ice cream in the Netherlands.

They’ve been selling vegan Ben & Jerry’s in other countries for a few months so many Dutch vegans, flexi-vegans or lactose-intolerants were waiting for them to also sell them in the Netherlands.

And their prayers have been heard. From next week on Ben & Jerry’s will sell two vegan ice cream pints in The Netherlands. They have a dairy-free Chocolate Fudge Brownie and a Chunkey Monkey pint (which you can also make yourself, check this page for the recipe) The dairy-free Ben & Jerry pints are still Fairtrade certified and they taste just as good as the non-vegan versions!

You can check the Ben & Jerry’s non-dairy store locater to find the nearest selling point. You can also add locations to this page if you see that one is missing.