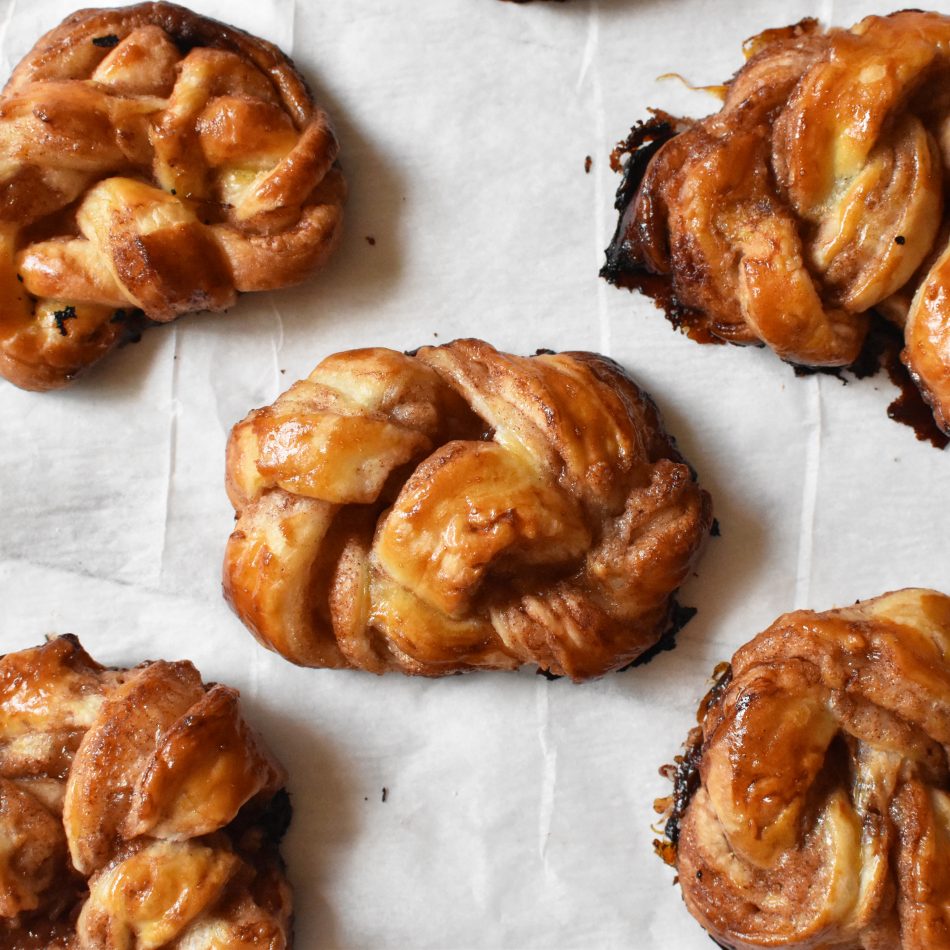 I made vegan cinnamon knots! They’re exactly the same as vegan cinnamon buns, swirls or rolls, but this time I tied a knot from the dough. You get a special shape, that turn this vegan snack into something truly special.
If you don’t feel like making knots, you can of course follow all the steps from this recipe but roll them instead of knotting them.
Looking for a good technique for making Cinnamon rolls? Check out my video on how I rolled my Nutella Swirls.

For these cinnamon knots I used a large vegan puff pastry sheet from the supermarket, but you can of course also make your dough from scratch or use several small puff pastry sheets and create one big rectangle from them with a rolling pin.
The trick for this recipe is of course on how to make the knots. Because it’s quite hard to explain in words, I made a video showing you how to tie the dough to knots. You can see the video at the bottom of this page.

These vegan cinnamon knots make a great snack, but you can also serve them as dessert with a scoop of (vegan) ice cream. They taste best if you eat them straight out of the oven when they’re still warm. But you can also just warm them up in the oven for a few minutes if you’re eating them later.

Mix the coconut sugar, cinnamon and coconut oil in a bowl.
Roll out the vegan puff pastry sheet.
Cover the middle third of the sheet with half of the cinnamon mixture. Fold the right part over the middle. Cover it with the remaining cinnamon mixture.
Fold the left third over the middle, so you’ll get a rectangle 1/3 of the original size of the puff pastry sheet.
Sprinkle with a bit of flour and use a rolling pin to flatten the puff pastry sheet.
Use a pizza cutter or sharp knife to cut the dough in 8 strips.
You can know make a knot in each strip hower you want it. You can look up inspiration for knots on sailing websites, or check my video to see how you can make the cinnamon knots I made. Don’t forget to tuck under the ends.
Bake the cinnamon knots in 25 minutes.

Watch my video for the step-by-step tutorial: