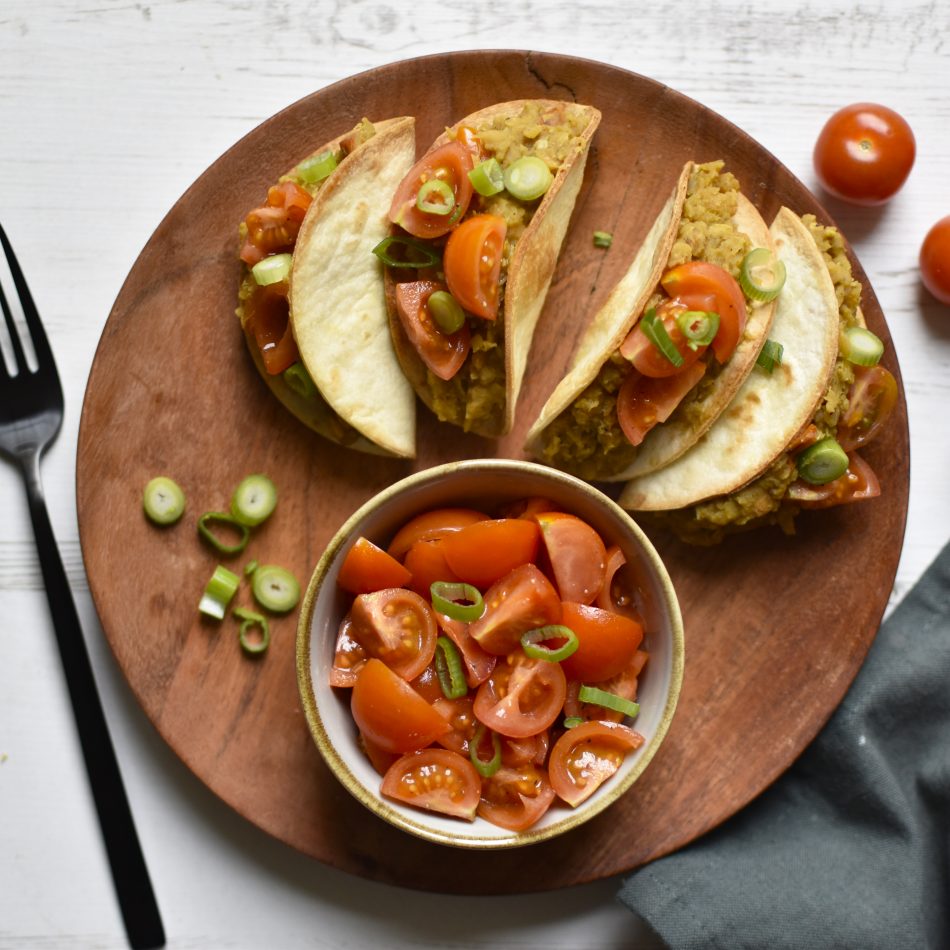 On this page I’m sharing the recipe for vegan Dahl Tacos. Speaking of fusion cooking, this recipe combines Indian Dahl with Mexican tacos. And the combination might surprise you! I think the crunchy oven baked tacos are a great combination with the comforting red lentil dahl.

Dahl, sometimes spelled Dal, is a dish from India that’s made from pulses like lentils, peas and beans. The pulses that you use are dried and split, so that you can easily get the right soft texture. Most dahls are made with red lentils and so is this vegan dahl. Dahls are often made with coconut milk but I don’t always like the taste of coconut milk so this one is without it. Making dahl without coconut milk also means that it’s a bit more firm, which is great as you’ll be serving it with crunchy tacos and you don’t want them to get soft or break.

The crunchy tacos are real easy to make yourself. Just spread them with vegetable oil and hang them over your oven rack. In just a few minutes in the oven, you’ll have crunchy tacos in the right shape.
Scroll down for the recipe for these vegan dahl tacos.

Preheat the oven to 200°C (180°C for a fan oven). Rinse the lentils. Halve about 2/3 of the cherry tomatoes . Halve the spring onions crosswise. Peel and finely grate the ginger. Peel 2 cloves of garlic and dice very finely or press them through a garlic press.

Sauté the ginger, garlic, the white slices of the spring onions and 2-3 teaspoons of Garam Masala in a medium saucepan with 1-2 teaspoons oil over medium-high heat for 1-2 minutes. Add the lentils and the halved tomatoes, fry for 2-3 minutes. Pour in 400ml of hot water, boil briefly and cover. Let it simmer on low heat for approximately 15 minutes.

Quarter the remaining cherry tomatoes. Mix a dressing from 1/2 tablespoon olive oil, 1 teaspoon vinegar and a pinch each of salt and pepper, mix in the quartered tomatoes and set aside.

Thinly spread olive oil on both sides of 4 tortillas and hang over a baking rack so that a taco about 10cm wide forms. Bake for 5 minutes in the oven and remove carefully.

Tip: It might be tricky to bite out of the tacos, but you can scoop out the dahl and use chunks of the taco to dip.