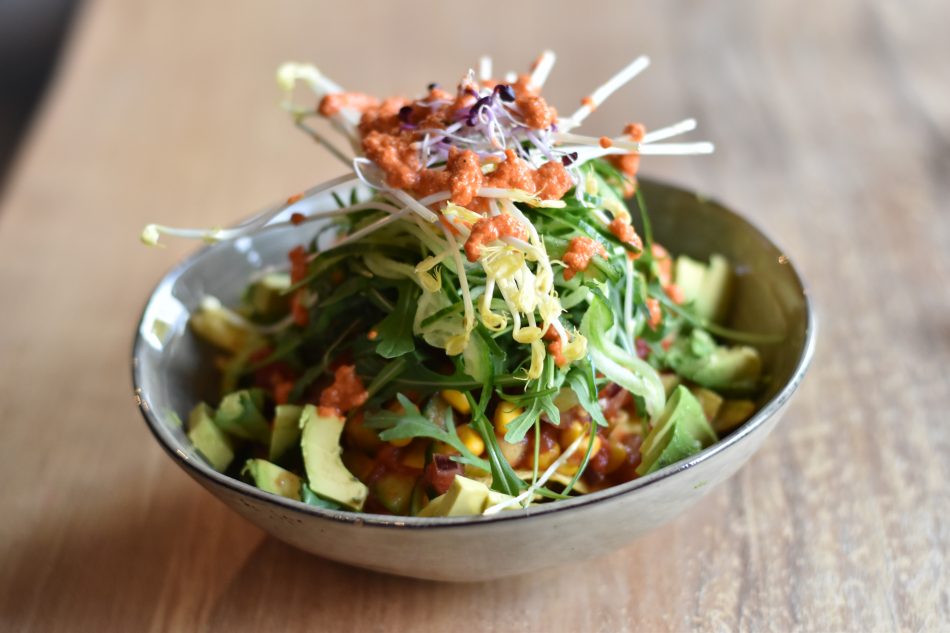 When I moved to Tilburg, I never thought I would be able to write a blog post about vegan food spots in Tilburg. There were simply no all-vegan restaurants and even the vegan options at regular restaurants where very, very limited. I’m so happy to tell you dat Tilburg now has several great options for vegans! These all-vegan or vegan-friendly restaurants and lunchrooms aren’t only great for full-time vegans, but for everyone that wants to eat more environmental and animal friendly. And if you’re lactose intolerant, all places in this blog post are suitable for you as well of course! Most of the restaurants listed on this page also have gluten free options.

Focus Foodbar opened in August 2019 and is a 100% plantbased restaurant in the city center of Tilburg. Their motto is ‘good food deserves a good look’ so the vegan dishes at Focus are really beautiful! They’re open for lunch and dinner. On the lunch menu of Focus you’ll find all kinds of sandwiches, a tofu bun and burgers. They also have 2 vegan soups and 2 vegan salad bowls. For dinner there are several starters and several main dishes; from vegan risotto-paella to the famous Beyond Burger. There temporarily was another vegan restaurant in Tilburg: Mon-O fastfood was a pop-up delivery joint. Everything on their menu was vegan, so this ‘cheese burger’ is also completely plant-based! They also had delicious ‘kapsalons’ and sweet potato fries. Unfortunately Mon-o is closed at the moment, but I hope they’ll open up again soon!

Doesn’t this vegan cheesecake look divine? The ‘cheesecake’ is from Van Planten (‘from plants’), a 100% vegan patisserie from Ella. She sells her vegan pastries at Velerlei, a conceptstore in the Nieuwlandstraat. At Velerlei you’ll find several secondhand shops, an ecological hairdresser, couscous bar Olives and Spices and a coffee bar. At the coffee stand you can buy the vegan sweets from Van Planten. This ‘no cheesecake’ is made with cashews and soya with a raspberry layer. But she has different vegan cakes on offer each week, like caramel shortbread or carrot cake. All plant based!

De Groene Chef used to be located in creative hub Bank15 near the central station of Tilburg. They were gone for a while, but now they’re back! You can find De Groene Chef at Mercado Emma in the Emma passage. On the menu are all kinds of delicious healthy meals. The loaded tortilla chips for example that are pictured on the top of the page. They’re made with 100% corn tortilla crisps, so this dish is gluten free! The nachos are topped with home made pico de gallo, kidney beans, avocado and raw vegetables. Cigkoftepoint is a 100% vegan take-away and delivery restaurant that opened up in January 2021. They sell a vegan version of the Turkish Cigkofte. They’ve got three different sizes of vegan cigkofte platters and a cigkofte durum. They also sell vegan sushi. They’ve got several rolls that you can either order separately or you can order a box with a few pieces of each of their rolls.

Another great vegan food spot that used to be in Bank15 but is closed now, is Vegan Heroes. Luckily they’re still open in Eindhoven. De Gouden Radijs offers vegan catering and you can also order vegan cakes there. This vegan chocolate Mandala Cake (because of the pattern) is made by Marit from the Gouden Radijs.
During Covid times, De Gouden Radijs also has a vegan drive through at Stoom 013 in de Spoorzone. You can order in advance and on Thursday evenings you can pick up your vegan 3 course dinner by bike, foot or car at Stoom013. I don’t know if they’ll continue when the restaurants open again. Eatonomy used to be my favorite vegan lunchroom but unfortunately they’ve closed their doors for the public. The good news is that you can still order your catering or cakes at Eatonomy. So if you’re organizing a party, high-tea or wedding you can order your sandwiches or cakes with them. Everything that Eatonomy makes is plant based, gluten free and refined sugar free, so you’ll have a healthy party that satisfies every diet-wish or allergy.

Besides these 100% vegan restaurants, Tilburg also has restaurants that are not entirely plant based but who have great vegan options.

Locals has a special vegan breakfast and lunch menu. They’ve got 4 vegan breakfast dishes, including this toasted banana bread with granola and coconut yogurt. And they’ve got 5 vegan lunch dishes. My favorites include the Hummus Veggie Wrap and the Vegan Quesadilla with spinach, tomato and avocado.

Don’s Noodle Shop is a take-out and eat-in Asian food spot. They have a vegan version of almost all their dishes on the menu. They have vegan noodle soup with tofu and/or tempeh and a vegan mango salad with rice noodles and bean sprouts. They also have the rice paper noodles pictured above with tofu, rice noodles, red cabbage and carrot. My favorite vegan snack from Don’s Noodle shop is the tofu and tempeh bao buns. You get 2 per serving and I’m never sharing them.

I’m a huge fan of the Dutch Weed Burger, a vegan hamburger made with seaweed.It even won my best veggie burger of Amsterdam competition! They have their own restaurant in Amsterdam but they sell the vegan burgers in restaurants across the country. In Tilburg you have 2 options to taste the Dutch Weed Burger; at Studio and the Ristobar of Cinecitta.

Waanzinnig is a restaurant where you can get a 2 or 3 course dinner. They have many vegetarian and several vegan options on the menu. The menu changes regularly but you can always check it beforehand on their website. At the moment they have vegan starters like pumpkin soup, falafel or the mediterranean quinoa salad pictured above. They have a vegan curry as a main dish and they vegetarian burger can also be made vegan upon request.

Silk Road is the new restaurant from the owners of Sarban on the Besterdring. At Sarban you get a living room feeling and they serve Afghan food. At Silk Road in the city center of Tilburg they’ve created a more restaurant feeling and they serve dishes from all kinds of areas in the East. They’ve got all kinds of mezze on the menu, so you order small dishes to share with your table. There’s a special vegan menu with 7 plant-based mezze like dahl and tabouleh.

Cafe Slagroom on the Piusplein has three vegan main dishes on the menu. For a cafe on the Piusplein, I was quite impressed that they even had one vegan dish on the menu, let alone three! They have a vegan couscous salad, a vegan Thai curry and a vegan burger. I went for the latter. The burger is served with an avocado dipping and mini potatoes, but you can swap those for fries.

At Pizzabar Rijslust in the Willem II straat they have a vegan pizza on the menu. It’s topped with vegan pulled pork made from jackfruit and Jack Daniels bbq sauce, vegan cheddar cheese, red bell pepper and parsley.
The Holy Guacamole pizza with nachos and guacamole is also possible to me made vegan (they switch the mozzarella with the vegan cheddar cheese if you order the vegan version).

Mr Morris is a great spot for breakfast or lunch, either to stay or to go. They have several good vegan options and you can order all their coffees with a plant-based milk. They’ve got a big range of smoothies and juices that are all vegan (or available in a vegan version). They also have several vegan smoothie bowls and they’re adding a vegan sandwich to their menu soon.

Sate Kid has been a restaurant in Tilburg for years until they closed down a few years ago. But at the end of 2019 they’ve opened up again on a new location, next to the Jumbo at the start of the Korvelseweg. Besides the new location, they also have a new menu with several vegan options. The Sate Tahu and Sate Nangka are both vegan. You can eat-in, take-out or have your meal delivered.

PokéYou is a poké bowl take-out restaurant. You can find it at the Albert Heijn XL supermarket. It’s across the entrance, next to the Etos and the Action. There are two vegan poké bowls on the menu; one with vegan tuna and this one called Sereh Tempeh. You can also create your own poké bowl and choose from the almost 20 ingredients to create a vegan bowl.

New York Pizza has a vegan pizza that tastes like a tuna and cheese pizza. This Vegan Tuna Melt pizza is topped with tomato sauce, vegan cheese, vegan tuna, union, olives and cherry tomatoes. The pizza base consists of 37% cauliflower. And for every Vegan Tuna Melt sold, they’ll donate 1,- to Sea Shepherd, the organisation for ocean conservation.

Bagels & Beans
At Bagels&Beans they have a bagel with vegan cream cheese and a vegan bagel with hummus. They also have a vegan burger with tomato, mayonaise, ketchup, red onion and pickles.

Cafe Bolle
Cafe Bolle on the Piusplein is a popular spot for students. They’ve got several vegan dishes on their lunch menu; from smashed avocado to vegan kroketten. My favorite is their vegan mushroom quiche that’s made with tofu instead of eggs and topped with vegan cheese. On their dinner menu are 3 vegan dishes; a vegan burger, vegan tempeh satey and a vegan pumpkin curry.

Giardino
At Giardino d’Italia, formally known as King of Italy, in the Reeshof neighborhood, they have vegan pizza’s, pasta’s, salads and soups.

Gember & Sereh
Gember & Sereh is an Indonesian restaurant on the Korte Heuvel. The Korte Heuvel is a very popular street, but besides the Dutch Weedburger at Studio, there aren’t many vegan options. Luckily Gember & Sereh has the best vegan rendang. It’s made with jackfruit and tastes great with rice or bami and some gado gado (ask if they skip the egg).

Click here for all my favorite food spots in Tilburg.