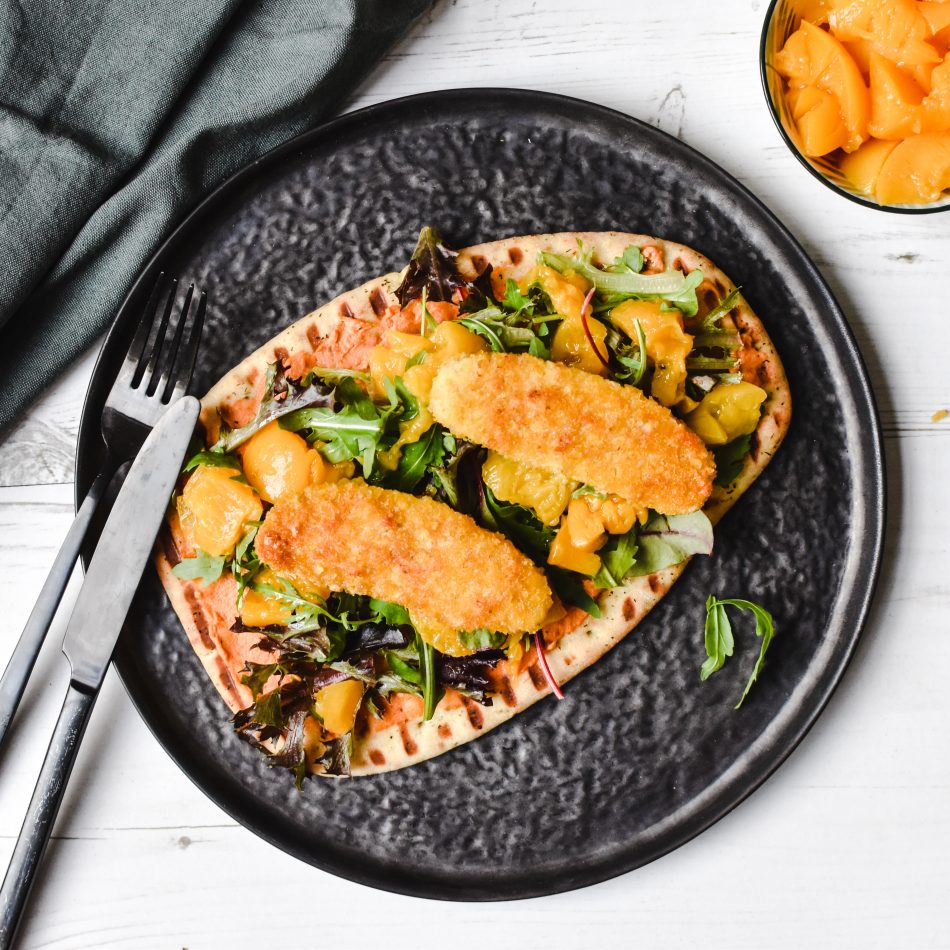 This veggie chicken naan bread recipe is my favorite dish for when I don’t feel like cooking but I do feel like comfort food. We eat it at least once a month. It’s done in just a few minutes, it’s super easy to make and it’s so satisfying. You might have seen it on my Instagram stories many times, but I never actually shared the recipe on my blog with you. So here it is! On this page you’ll find the recipe of this veggie chicken naan and I’ll tell you more about the background of this dish.

My boyfriend and his former flatmate both claim that they invented this recipe for naan bread with crispy chicken. My boyfriend Eelco’s argument is that he was first and that his friend Daan stole the recipe from him.
Daan however states that the dish is called ‘Naan from Daan’, so that it’s obvious that he invented it.
I don’t know who’s right, but I do know that it’s my go-to meal for when I don’t feel like cooking. And just between you and me, Dutch supermarket Albert Heijn has a recipe that is almost identical to this one. So I think they both didn’t invent it.

But I understand why they both want to claim the fame. This recipe is a real crowd pleaser. It’s done in just a few minutes, tastes great and is very satisfying. That’s why I’ve decided to make my own version of this recipe from either Eelco, Daan or Albert Heijn. I created a vegetarian version. This recipe is even suitable for vegans if you can find vegan naan bread.
The basics of the recipe are naan bread, hummus and rocket. All four of our recipes have these ingredients, although the kind of hummus varies. Daan, Eelco and myself prefer the spicy hummus. But as that isn’t available that much anymore, I sometimes create my own by mixing plain hummus with chili sauce. Or I use sundried tomato hummus.
Daan makes the naan dish with fresh mango, just like the recipe from Albert Heijn. Eelco makes his version with canned peach. And all three top the naan bread with crispy breaded chicken.
I’m using chopped canned peach for my recipe, as that’s just the easiest. And as I said, I love to make this recipe when I don’t feel like cooking.
And I made my recipe with veggie chicken, as I’m a vegetarian. As a matter of fact the crispy chicken that I used is even vegan. I used the SoChicken sticks from SoFine.

I used these SoChicken sticks before, when I made flatbread with the vegan chicken sticks.