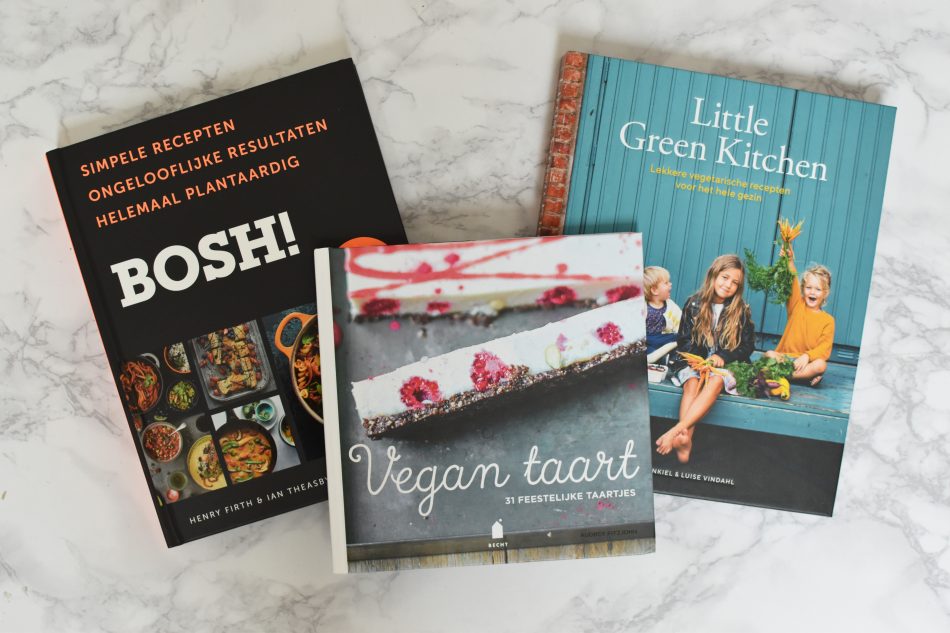 This summer 3 new vegan cookbooks have been released, and I love all three of them! On this page I’m sharing the reviews of these three books:
Bosch!, Little Green Kitchen and Vegan Cake. All three cookbooks are completely different, but they’re all filled with vegan recipes.

British guys Ian Theasby and Henry Firth are the men behind the very popular social media accounts Bosh!. On their Facebook and Instagram account they share video’s of plant-based recipes. Their first cookbook Bosh! is available in England, the Netherlands, the United States, Australia and South Africa. I have the Dutch version of Bosh!.
In Bosh! there are over 150 vegan recipes for every moment of the day. The guys from Bosh show that eating vegan isn’t boring or tasteless.
You can order the Bosh! cookbook in English and in Dutch.
Bestel hier het Bosch! kookboek in het Nederlands
Their new book Bish Bash Bosh will be available in Dutch soon.

Vegan Cake is available in 4 countries; the Netherlands, France, Sweden and Italy. They’re published in those 4 languages. I got the Dutch version called Vegan Taart. All the recipes in this book are without dairy. It shows you how to make delicious sweets without butter, eggs and milk. It’s a great book for vegans, but also for lactose intolerant. There are 31 recipes in this book. You’ll probably find some great inspiration for your Birthday Cake or Christmas dessert in this book!
Besides 100% vegan, the recipes also have a healthy twist as none of them contain added refined sugars or white flour.
Click here to order Vegan Taart