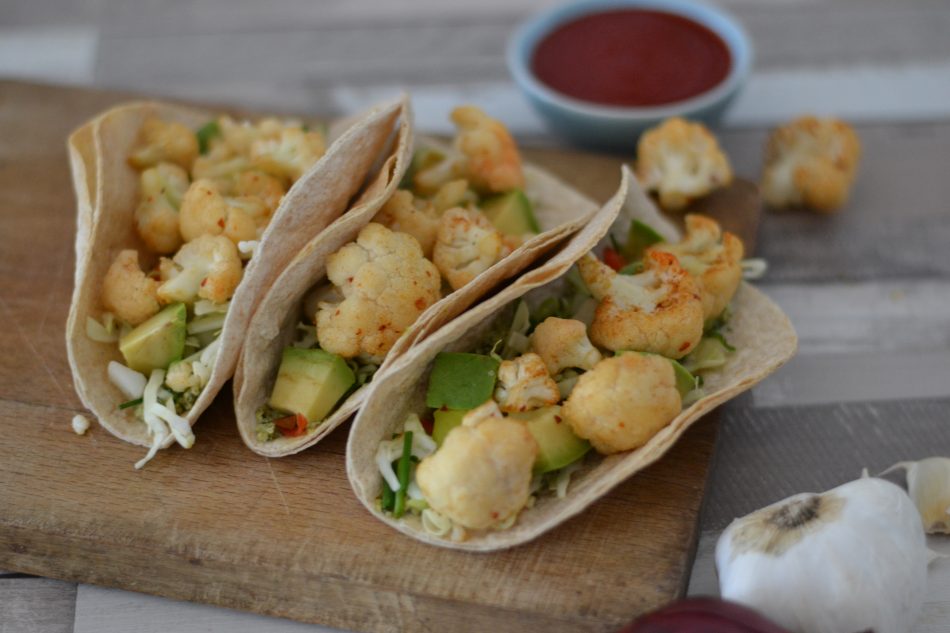 Cookbooks are my favorite kind of books! Especially if they’re full of veggie recipes. One of my favorites is the official cookbook of Thug Kitchen. Thug Kitchen started as a website but already has 3 cookbooks now. They show that eating vegan isn’t lame and many of my male friends really like this cookbook. You might need to get used to their use of language as there’s quite some cursing involved, but I laugh out loud when I’m flipping through the book.
I made a real ‘vegan for men’ dish out of their official cookbook: tacos with roasted cauliflower that was marinated in beer! You can find my version of the recipe below (I say ‘my version’ because I made some minor adjustments). * just choose your favorite beer, as long as it’s not anything super heavy.

Preheat the oven to 400F/200C. Chop the cauliflower in small florets. Warm the beer, broth, lime juice, soy sauce, hot sauce and garlic in a saucepan over medium heat. Add the cauliflower and simmer for about 2 minutes. Drain.
Toss the spices and olive oil together in a big bowl and stir in the cauliflower. Put the cauliflower on a baking sheet and bake until browned. This will take about 20 minutes, stir halfway.
Prepare the tacos as instructed on the package. Stuff them with the carrot/cabbage slaw and avocado. Add the cauliflower when done and serve with some extra hot sauce.