Tagliatelle with vegan salmon from SoFine 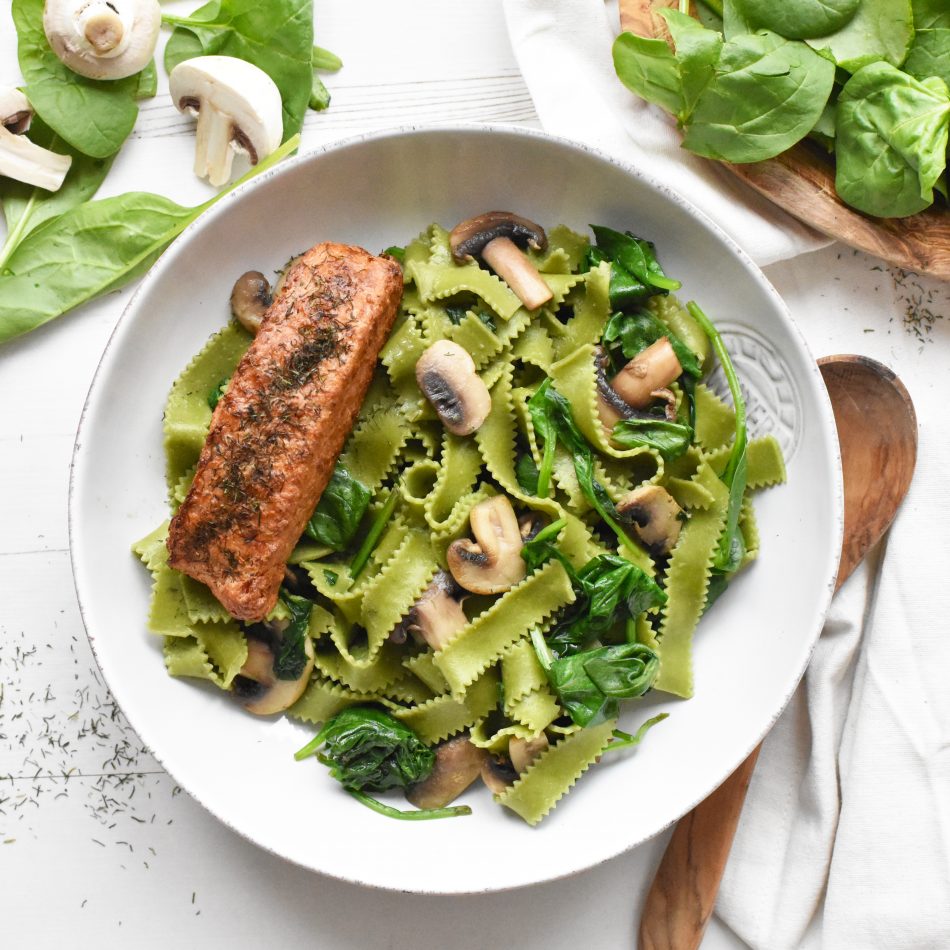 I created a tagliatelle dish with the new vegan salmon filets from SoFine. These salmon filets look and taste just like actual salmon, but they’re 100% vegan! As a vegetarian I love trying out new plant-based products so I was really curious to try out these new SoFish Fillets Salmon Style, as they’re officially called. I created a dinner recipe with the vegan salmon that is satisfying and filling, and I’m sure that no one will actually miss the real fish.

As you probably know, we’re eating so much fish in the world, that there are less and less fish left in the ocean. Eating farm-raised fish also has many downsides. Because there are so many fish in a small basin diseases spread easily and fish can attack each other because of the shortage of space. The farmers use chemicals to control these things, that end up in the fish that you eat. And all this is besides the ethical objections that you can have against eating animals.

I’m happy to have found out that SoFine created a vegan salmon fillet and I was very curious to find out about the taste as fish is difficult to re-create.
I knew that SoFine would do well as I also made vegan fish and chips with their vegan fish burgers. The SoFish fillets Salmon style are made with organic non-GMO soy and are low in saturated fats and salt and high in protein and fibers.
You can bake the vegan salmon fillets in a pan for 9 minutes or in the oven for 11 minutes. And I tested a third way of preparing the vegan salmon: in the airfryer! I tried one filet in the pan and the other in the airfryer to tast the difference. Although the one from the pan had a nice crispy crust, I preferred the salmon from the airfryer as it was evenly well done.
Scroll down for the recipe of the vegan salmon of SoFine with tagliatelle.

Preheat the oven to 200 C, put water to a boil. Prepare the tagliatelle as stated on the package. Put the cherry tomatoes in an oven tray, spray with olive oil and bake for 10-15 minutes. Sprinkle the SoFish Salmon filets with dill and bake them in the Airfryer for 10 minutes. You can also put them in a regular oven for 10 minutes or fry them on medium fire for 5-10 minutes. Warm olive oil in a pan and shorty fry the mushrooms. Add the spinach and fry until ready. Drain the tagliatelle and add to the pan with spinach and mushrooms. Stir together for 1 more minute of low fire.
Serve the mushroom-spinach tagliatelle with the SoFish filets Salmon Style and the cherry tomatoes.