The best bars in Raval, Barcelona 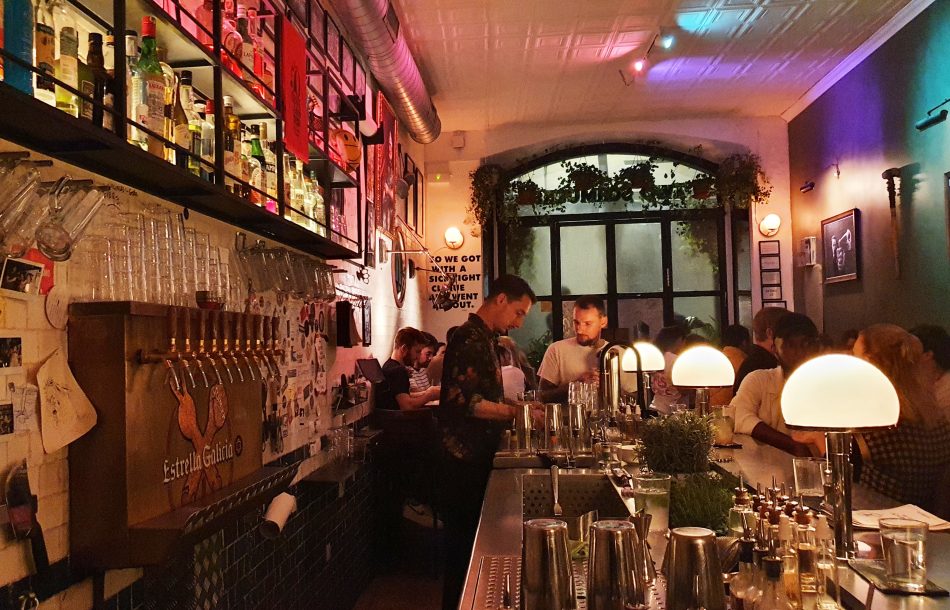 The Raval neighborhood is a great area to go out in Barcelona. If you’re looking for a bar area, where you can find multiple nice bars in one street, Raval is the place to go. On this page I’m sharing a list of the best bars in Raval. The best nightlife in Raval can be found at Carrer de Joaquín Costa, but there are also a few bars in other streets that are worth a visit.

Two Schmucks is a great bar in Raval. It’s actually listed as on of the 50 best bars in the world! You might expect a fancy and expensive place for a cocktailbar that’s listed number 26 in the world, but the atmosphere is super casual and relaxed. The cocktails are superb, but the interior is creative, unorganised and fun.

After the succes of Two Schmucks they opened up Lucky Schmuck in the same street, just a few doors down. The interior is very interesting with a wooden wall, a giant disco ball and several typical American ornaments. A great quirk is that they’ve got a small karaoke room in the back.

Casa Almirall is one of the oldest still existing bars in Barcelona. It was founded in 1860 and is really well preserved. You can still breath in the bohemian atmosphere. The bar is divided in two areas. The first one is pretty much unchanged since it opened. The second part is from around 1980 when they transformed the former storage room to an extra bar area.

33 I 45 is a great bar to have a drink after dinner. It’s alternative; has an interior with all different kinds of furniture and local art on the wall. They sell all kinds of beers, wines and cocktails and also have a small tapas menu to accompany your drinks.

Another great bar in Raval that has been around for a while is Bar Muy buenas. This bar was founded in 1928. I love the original tiles on the floor and the big woodwork in the back. You can almost see the roaring twenties come to live in bar Muy Buenas.

Carnal is a great cocktail bar in Raval. The name makes you think of bodily pleasures and appetite, which you can also see in the interior. The bar almost looks as if you’re in a former butcher. On the menu are tasty cocktails for a good price.

Ølgod is a craft beer bar in Raval. The bar is mostly known by locals, so it’s a great place to get away from the tourists. You can have all kinds of good beers here, and they also sell a few good food dishes (including a great vegan option).