The Best Rooftop bars in Barcelona 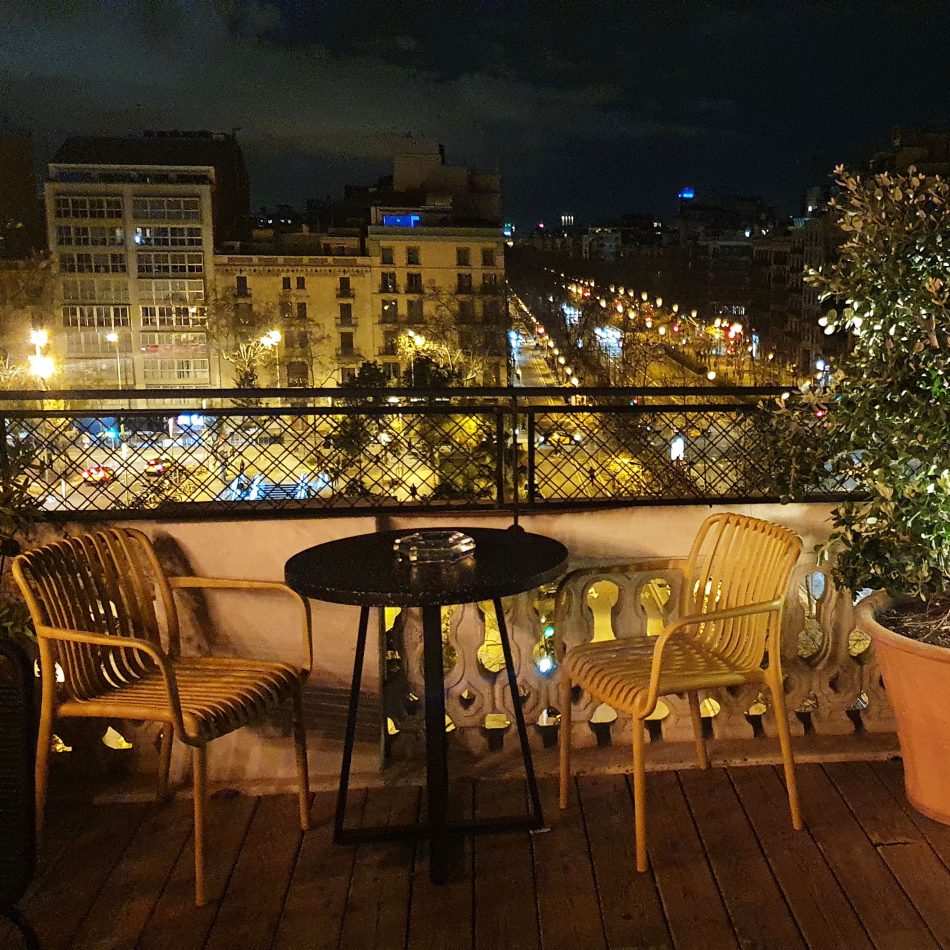 Another great rooftop bar with views over a cathedral is Hotel Colon. This hotel is right across the Cathedral of Barcelona in the Gothic Quarter. From the rooftop restaurant you can watch the beautiful Barcelona Cathedral.
Fun fact: you can also visit the roof of the Cathedral itself. But the views are better from Hotel Colon as you can see the Cathedral towers from there.

The El Palace Hotel Barcelona has a beautiful rooftop garden. It’s the largest rooftop bar in Barcelona, it’s no less than 1,500 m2! This open air ‘garden’ houses over 50 kinds of plants, and that’s not all. There’s also a swimming pool, a pond, a solarium and a haute-cuisine restaurant. You can also visit the rooftop garden of the El Palace Hotel if you’re not a guest. They also host activities like yoga, pilates, master classes and an open-air cinema.

The rooftop terrace ‘terraza’ of the Claris Hotel is a heated terrace that’s open all year round. So it’s a great rooftop to visit in winter! They serve Mediterranean food from Michelin star chef Aurelio Morales. They also have a tapas and cocktail menu. If you don’t have that much to spend, you can also go for their three course lunch menu that’s only 35,- including water, a glass of wine and a coffee.

Barceló Raval is a hotel in the lively neighborhood Raval. It’s a round building on the main ‘Rambla de Raval’ square. The rooftop bar of Barceló Raval offers 360 degrees views over the old city of Barcelona. You don’t have to stay at the hotel to visit the rooftop. Just take the elevator to the top floor and use the stairs to get at the rooftop bar.

The rooftop bar from Restaurant Casa Luz has an indoor and an outdoor area. The bar is conveniently located, right next to the Universitat subway stop. It’s a great spot to go for a cocktail. They also have a very tasty non-alcoholic limonada if you don’t want to drink alcohol.

Negresco Princess is a 4 star hotel in the middle of Barcelona, not to far from Placa de Catalunya. It has a rooftop terrace with a swimming pool. It’s a great spot for breakfast, lunch, dinner or drinks. From the rooftop you can see the Sagrada Familia, Montjuic and the Tibidabo mountain.

The Wittmore Hotel in Barcelona is a small luxury hotel. This adult-only hotel has 22 rooms and is located in the Gothic quarter, near the sea. The Wittmore has what they call a ‘roofless suite’. This means that guests who book the master-suite can book the rooftop als an extension to their room. From midnight to 7am the rooftop with swimming pool is completely for you. Your own private rooftop bar!
Luckily you can also visit the rooftop without breaking the bank (one night in the suite is over 1,000 euros). Until midnight the ‘roofless suite’ is also open to the public for drinks and snacks.

The Barcelona Edition is a hotel in El Born and part of the Editions hotel group. Their rooftop bar is called The Roof. It’s located on the 10th floor and serves drinks and light dishes. The terrace has a wooden parquet floor and is decorated with wooden furniture and ivory colored cushions; giving it a very luxurious appearance. Also nice: every Saturday and Sunday they serve a weekend brunch from 11am to 4pm. And in the weekend evenings they often have ‘sunset sessions’ with a DJ.

The Yurbban Hotel on Trafalgar street has a great rooftop bar and pool. It’s located on the top floor of the hotel and is 127m2. It’s open from 4pm to 11pm for small bites and cocktails.
The hotel also has rooms with a private little terrace.

There’s another Yurbban hotel right next to it, called Yurbban Passage. This hotel also has a rooftop bar and pool. It’s even bigger (287m2) than Yurbban Trafalgar. Besides the pool it also has a relaxing area with comfortable sofas.

Hotel The One has a beautiful rooftopbar called The Mood. They’re open from noon to midnight and serve lunch, dinner and cocktails. The rooftop bar has a swimming pool and sun beds. There’s also an area where the food is served were they’ve got white linnen chairs and many plants.

The rooftop bar from the Majestic Hotel is located on the 10th floor and is called La Dolce Vitae. And life sure is sweet there! You’ve got views over the city center of Barcelona, with sights like Sagrada Familia, Casa Batlló and Torre Agbar. They’ve got a great food and drins menu. The rooftop bar is open every day from noon to 7 or 9pm (except in the coldest winter months). In summer months they often got a DJ. The bar is open for everyone, the pool is only for hotel guests.

Grand Hotel Central has a sky bar with great views all over the city and an infinity pool. They often have a DJ and you can enjoy cocktails and Mediterranean bites. The Sky Bar is open to hotel guests every day of the week, and for visitors from Friday to Sunday from 1pm to 11pm.

83.3 Terrace Bar is the bar of hotel Royal Passeig de Gràcia. It’s the highest rooftop bar in Gracia and has 360 degrees views over the city. The rooftop bar is covered with glass, so you can also enjoy the views when it’s cold or rainy. They serve all kinds of tapas and street food. They’re open 7 days a week until 1am.

Eleven BCN is the rooftop bar of the NH Collection Barcelona Gran Hotel Calderón. It has a big swimming pool, lounge beds and a bar. It’s got 360 degrees views, so you have a beautiful view over the city. They’ve got an a-la-carte menu, snacks and cocktails. They’ve also got gluten-free options. I heard that this rooftop bar allows kids too, so that might be a plus if you’ve got kids.

1881 per Sagardi is the rooftop bar on top of the Museum of the History of Catalonia. It’s not very high, but as it’s located right at the harbour, you still have lovely views. Restaurant 1881 per Sagardi is located on the 4th floor of the museum and serves traditional Mediterranean food. It’s called 1881 because that’s the year it was build. It’s the only old building that still exists in the port area of Barcelona. The Sagardi restaurant group has several restaurants in Barcelona, and a lot more all over the world from London to Valencia.

The Pulitzer Barcelona is located right next to Place de Catalunya. The terrace of the Pulitzer Hotel Barcelona is open from May to October. It’s open from Monday to Friday from 17h to 23h and Saturdays and Sundays from 13h to 23h. It’s open to the public and they often have live music. They’ve got a food menu with something for everyone.

The Hoxton Hotel Barcelona in Poblenou has a rooftop with 360 degrees views over the city. They’ve got a pool, but even better: a taco restaurant on their rooftop! They taqueria is called Tope and sells Mexican style tacos and delicious cocktails. All tacos at Tope are gluten-free.

Hotel Vincci Gala is a 4 star hotel located in the old center, close to the Ramblas and Place de Catalunya. Their rooftop terrace is called La Galana Terrace and is a great spot for a drink or something to eat. It has great views over the heart of Barcelona and a mini pool to cool down.

Tap here for the most Instagrammable spots in Barcelona.