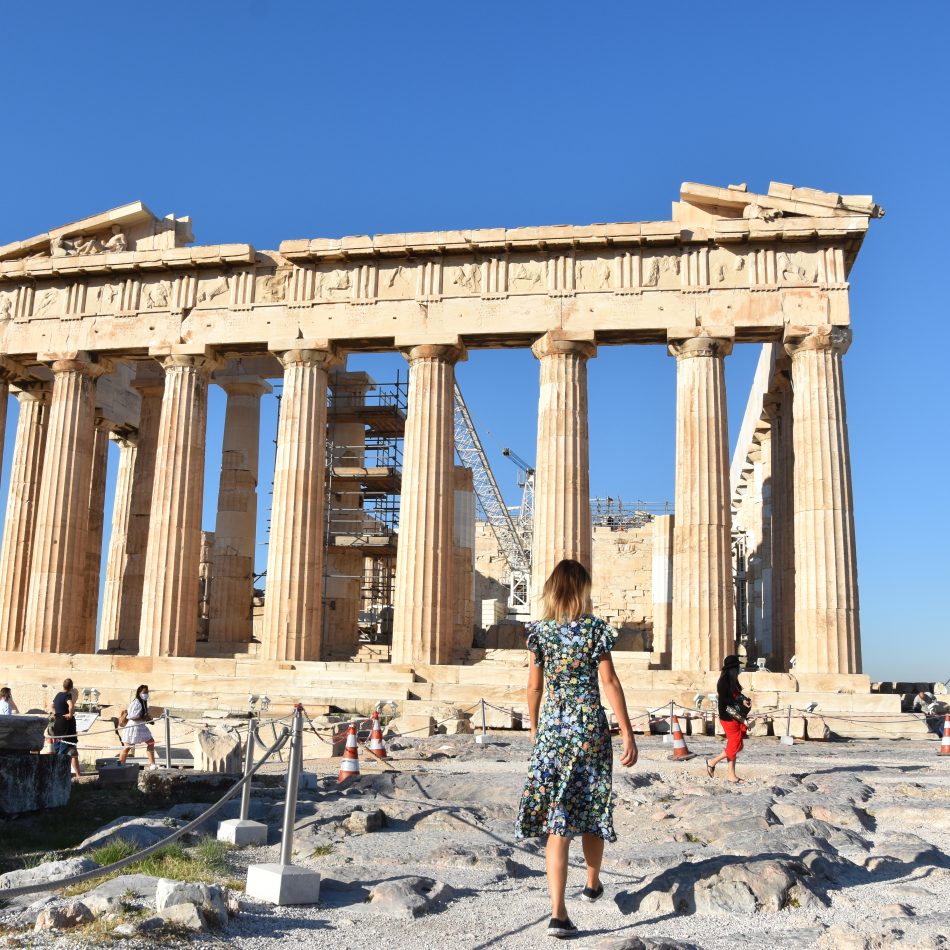 Are you visiting the Greek capital city Athens? I’ve got a list for you with all the top sights in Athens in Greece that you don’t want to miss.
Athens is a city with an incredibly long history and it’s fascinating to visit the sights that have been build thousands of years ago. On this page you can find an overview of all those incredible places to visit in Athens.

Athens is the capital city of Greece and it was also the center of ancient Greece. Every word that comes to mind when people think of Athens is Acropolis. The Acropolis is a hilltop in the middle of Athens. Most people think Acropolis is the name of an ancient building, but it’s the name of the hill. On this hill you’ll find several ancient sites. From almost every spot in the city you can see the Acropolis hill. You can walk up the hill via an easy broad street. Once you’re at the top you can get tickets for the actual old buildings. A ticket for just the Acropolis hilltop is €20 per adult, but you can also get a €30 combination ticket with access to several archeological sites in Athens.

The most famous building on top of the Acropolis hill is the Parthenon. It’s the largest ancient temple ever build in Greece. It took 15 years to complete and it’s already taking multiple decennia to restore it. You can walk all around the Parthenon but you can’t access it. There’s a viewpoint just next to the Parthenon with beautiful views all over Athens, and from there you can also take this picture with the Parthenon on the background.

Another top sight at the Acropolis hill of Athens is the Erechtheion. The temple to honor the Goddess Athena and the God Poseidon. The temple was build around 400 BC. What’s mostly impressing bout the Erechteion is the line of statues. It’s called the Porch of the Maidens and it shows 6 female figures.

When you enter the ticketed area of the Acropolis you’ll see this beautiful ancient theater to your right. The theater was build in 161AD by the Herodus Atticus. In the 1950’s it was restored to the theatre you see now.

The ancient Agora of Athens is a beautiful ancient building at the base of the Acropolis hill. An Agora was used as a meeting place where several activities took place. You can enter the area where the Agora is located with the ticket from the Acropolis if you went for the 30euro ticket.

The Stoa of Attalos is another top sight in Athens. It’s a covered walkway that is beautifully restored in the 1950s. It houses a museum and is just a beautiful spot to walk around.

The Acropolis museum is worth a visit just for the building alone. It has a beautiful interior design! In the museum you can find all kinds of treasures from the Acropolis hill. The museum is actually build on pillars above an archeological site that you can also visit with your museum ticket.

Pictured you see the Temple of Olympian Zeus. It was named after the head of the Olympian Gods Zeus. Construction began in the 6th century BC but wasn’t completed until the 2nd century AD. Just a few years after it was completed it was already destroyed by an invasion and remained a ruin after that.

Hadrian’s Arch, also called Hadrian’s gate, is an ancient gateway. It’s located between the city of Athens and the temple of Olympian Zeus. It’s quite nice to see how it’s so integrated in the modern world nowadays as it’s located right next to a motorway.

The Panathenaic stadium is a large ancient stadium. It was originally build in 330 BC by a Greek statesman and later rebuild in marble by a Roman Senator in 144 AD. The Panathenaic stadium is the only stadium in the world that’s completely made out of marble. The stadium houses 50,000 spectators. It was refurbished and hosted the opening and closing ceremonies of the first modern olympics in 1896. You can visit the stadium and the small museum inside. You can even run on the track!

The Zappeion was build at the end of the 1880’s. It was used for several activities during the first modern Olympics. Nowadays it’s still used for meetings and conferences. Behind this facade you’ll find a round hall with white columns.

The Syntagma square is a square in the center of Athens, close to the National Garden. It’s a paved square with a fountain. On the background you see the Royal Palace where the Greek parliament is located.

Did you know that you can go to the beach in Athens? Riviera beach is located at the edge of the city center and has a beautiful sandy beach. From the city center you can take the subway to the Faliro metro station. It’s a great spot to relax and to go for a refreshing swim.

I have to admit that the archaeological site of Sounion isn’t in the city center of Athens, but I thought it couldn’t miss in a list of top sights in Athens. You can find this site about 1 hour South-East of Athens. It’s a great destination for a day trip from Athens if you rent a car. You can drive all the way along the coast.

Speaking of the coast. On warm summer days it’s a great idea to escape the heat of the city and drive to the coast. One of the top beaches near Athens is Vouliagmeni.

Another nice beach close to Athens is Glyfada. There are several beach bars there from which you can watch the sunset every evening. It gets crowded in the weekends, so if you can I’d recommend you go on a weekday.

When you’re about to travel to Greece, remind to plan your trip ahead by reserving a parking spot at the airport. You can save a lot of money by comparing airport parking providers at Schiphol with Vliegen en Parkeren.

Need a hotel for your trip to Athens? We stayed at the O&B Boutique Hotel. I loved the location as you’re right next to the touristic area with all the top sights of Athens listed on this page. But you’re also in a neighborhood where the locals live, dine and drink. Everything was on walking distance from our hotel.

Click here for the best vegetarian restaurants in Athens.

Click here for all my travel blogs on Greece.