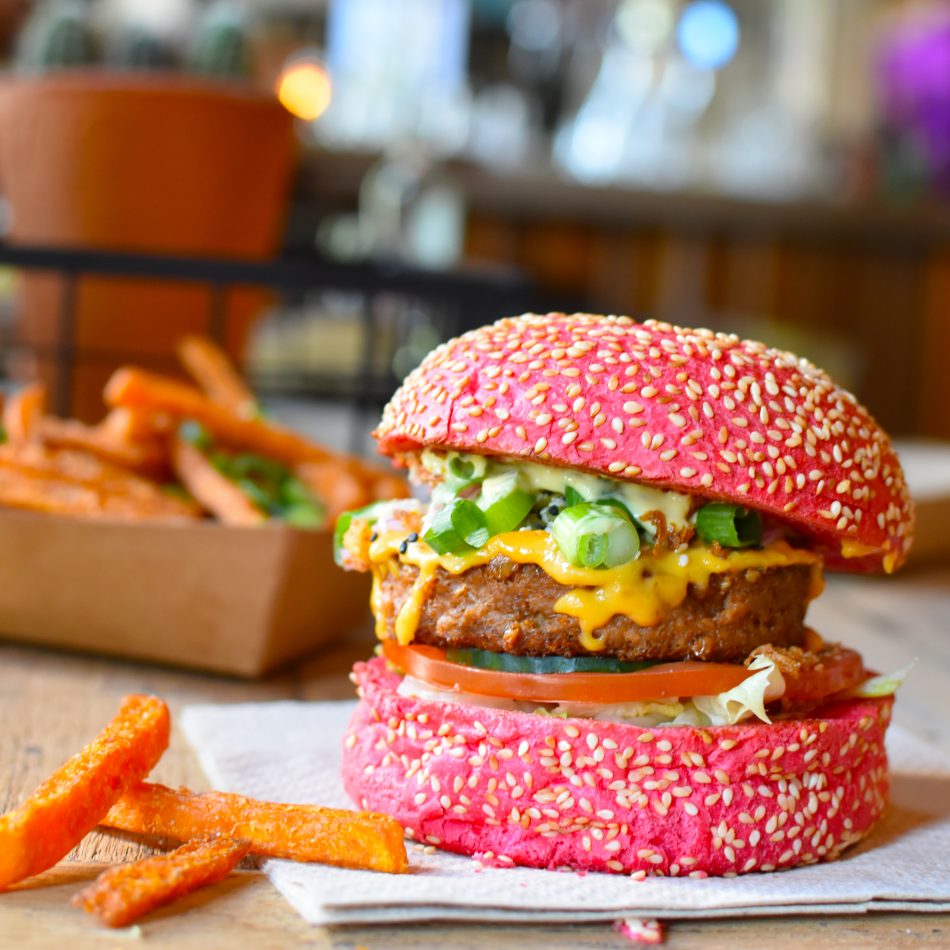 You can find Vegan Heroes at the spot in Bank15 where (also vegan restaurant) De Groene Chef used to be. Bank15 lets restaurants rent a kitchen in their building for 18 months, so you can start up your business. The 18 months had passed for De Groene Chef so they’re looking for a new location and continuing their catering activities in the meantime.
I’m very happy that another vegan spot has opened up Bank15. I already knew Vegan Heroes from Eindhoven and after having been to the Vegan Junk Food Bar in Amsterdam several times, I wished something like that would open up in my hometown Tilburg.

At Vegan Heroes they serve pink vegan burgers in several varieties. I went for the vegan cheese burger, with ‘cheese’ that tasted just like Cheddar! But they also have a burger with kimchi and a burger with fried onion rings. For the patty you can choose between the Beyond Meat Burger and the Dutch Delight.

They also have vegan hotdogs, vegan loaded fries and vegan donner kebab. As a side dish with your burger you can go for one of their fries varieties. I went for their sweet potato fries but I want to try the one with melted ‘sweet dreams are made of cheese sauce next time.
They also have all kind of snacks like vegan bitterballen and vegan Mac ‘n Cheese, and many gluten free items that are clearly listed on the menu.

Vegan Heroes is open for lunch and dinner. Their vegan hotdogs make a great lunch, and with only 4,95 they’re very reasonably priced.
They’re not on the menu, but you can ask for it at the counter; the raw, vegan, gluten-free desserts from Nats Raw Line.

You can find Vegan Heroes at the Spoorlaan in the city center of Tilburg.

Click here for all my vegan favorites in Tilburg.