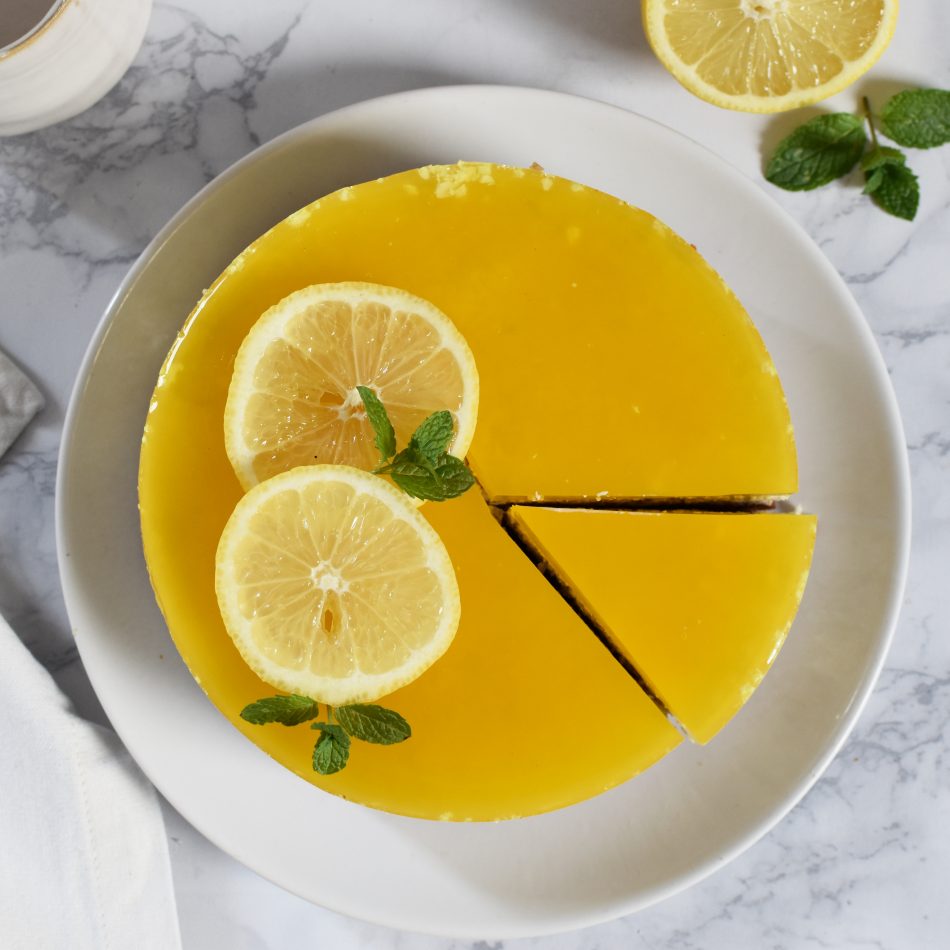 Limoncello is an Italian lemon liqueur. It’s mainly produced in Southern Italy but it’s a popular drink all over the country. It’s mainly served as a digestive, a small drink for after the meal. A very popular variety is Limoncello Cream, or Crema di Limoncello in Italian. Although you can find several vegan limoncellos in the liqor stores, Limoncello cream is practically never vegan as it’s made with either milk or cream. But the Limoncello Cream from Pallini is 100% vegan! The regular limoncello of Pallini is very popular and in the Netherlands it was even voted best limoncello.
For their Limoncello Cream, Pallini doesn’t use animal-based dairy. The cream comes from coconuts, making it a totally vegan drink.

The pretty yellow layer on top might seem like it’s made with gelatine. Gelatine is not vegan, even many vegetarians avoid it. Gelatine, or gelatin, is made from the collagen of animal bones. So I made a gelatin-free layer on top! For this I used Agar agar. Agar agar is a 100% plant-based product, so it’s suitable for vegans. It’s the best product to make vegan gelatin with! Agar agar is a powdered substance, made from algae.
It was my first time using it, so I didn’t know how it would turn out. But it was super easy to use and it created a beautiful, bright yellow layer on top.

Mix the margarine and the cookies in a food processor until finely crumbed. Line a small cake tin with parchment paper and spread the cookie crumbles over the bottom. Firmly press it down with the back of a spoon. Put the tin in the fridge and clean your food processor.

Put the cashews and the vegan limoncello in the food processor and blend until you’ve got a creamy texture. Scoop the cashew-limoncello layer over the cookie layer and put the cake tin back in the fridge.

Pour the sugar and the agar agar powder in a small bowl and stir with a spoon until mixed. Optionally you can add a pinch of turmeric to get a brighter yellow color. Add a few tablespoons of the water so that you can mix it and the sugar dissolves.
Put this mixture, the rest of the water and half of the lemon juice in a sauce pan. Bring the vegan lemon gelatine to a simmer. Let it simmer for 2 minutes until all is mixed well. Take it of the fire and add the remaining lemon juice. Stir well. Let the mixture cool off for a 5 minutes. Don’t bring it to a complete cool as agar agar sets at 40 degrees Celsius.
Gently pour the agar agar jelly over the cashew layer.
Let the cake set for at least 1-2 hours or until serving.

Please note that the benefit of agar agar is that you can leave the cake out of the fridge and the jelly layer will stay well. But after 2-3 days, it will lose its firmness. So make sure to eat it before then!