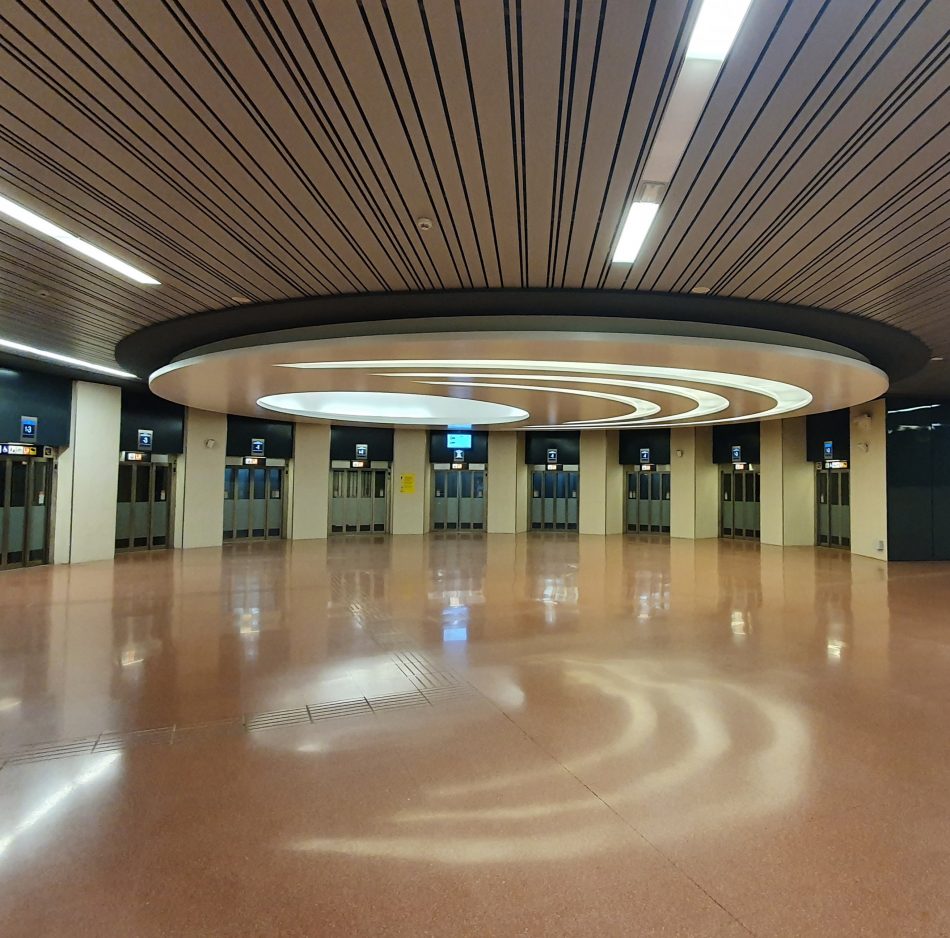 Looking for some Instagrammable places in Barcelona? On this page I’ve listed the best Instagram spots in Barcelona. From spiral staircases to great Gaudí architecture, every place on this page is very photogenic.

I love Casa Pere Brias, I think it’s one of the prettiest buildings in Barcelona. You can find it on Gran Via de les Corts Catalanes, right next to metro stop Rocafort. It has a mint-green color and beautiful details around the windows.

Another great facade in Barcelona is Casa Padua. This house with its green and Burgundy colors is such an original building. You can find this beautiful facade in the Sarrià-Sant Gervasi neighborhood, around the corner of the famous Gaudi building Casa Vicens.

The most Instagrammable subway station in Barcelona is Zona Universitaria. At the subway station you can find a round hall where you can take multiple elevators down. The picture at the top of this page is taken at the ground floor, and the picture here is taken from two floors down.

At Parc de la Ciutadella you can find this beautiful pond with fountains. There are stairs behind it that lead to a Venus statue. The stairs around the pond are a favorite Instagram spot for many.

Poble Espanyol is an open-air museum. It has replicas from streets and houses from all over Spain. There are all kinds of Instagram spots like this street that has a different decoration every season or a cute spot with a yellow bench in front of a white wall with dozens of blue flower spots. You pay an entrance fee and after that you can stroll around this remade village. You can find Poble Espanyol in Poble Sec, at the foot of the hill.

The Kiss of Freedom is a mural in Barcelona. The official title is ‘El món neix en cada besada’ and it means ‘The world begins with every kiss’. It’s made up from thousands of pictures. Citizens of Barcelona could send a picture of something that represents freedom to them, and artist Joan Fontcuberta made this mural from it. You can find The Kiss of Freedom in the Gothic quarter.

If you ask me, this is the most Instagrammable spot of Park Guell: The Hypostyle Room. With its 86 pilars you can take some great pictures for your Instagram account!
The entrance/exit of Park Guell is also a nice Instagram spot, you’ve probably seen the mozaic lizzard and the two houses next to the gate.

This former hospital is a real gem to visit, not only for Instagram pictures but in general. The Hospital de la Santa Creu i Sant Pau consists of multiple buildings that are all beautiful. Many of the parts are restored and brought back to its original look. It really gives you a peak into history. The art nouveau hospital dates back to the 1920’s. I almost couldn’t decide on what picture to post here, as I took so many beautiful photos there.
Tip: you can buy a combined ticket to the Hospital de la Santa Creu i Sant Pau and Gaudi’s La Pedrera (Casa Mila). You don’t even have to visit them on the same day, the ticket is valid for 3 months.

Fabrica Lehmann (Lehmann Factory) is a real hidden gem in Barcelona. It’s a courtyard, a bit tucked away, in the Eixample neighborhood. If you don’t know that it’s there, you’ll probably walk straight past it. But it’s a very Instagrammable spot! This old factory is now a nice courtyard with several small businesses.

Restaurant Cremat Lounge has a very Instagrammable interior. I especially love this little spot. The neon ‘Oops! I dit it again’ sign and the light blue velvet chairs make a perfect background for a selfie.

The Palau de la Música Catalana is one of the prettiest concert buildings I’ve ever seen. The concert hall itself is amazing, but I also really loved this balcony with its mosaic pillars. The whole building is very colurful and decorated in detail. You’ll need tickets to get in, but in my opinion it’s totally worth it.

In general, I think it’s a good idea to look up often when you’re walking around in Barcelona. Many buildings have lovely facades. But at this spot it’s particularly nice to look up. Because of the shape of the buildings you can take this great picture. You can put your phone on the street and take a picture with the timer. You can also use your wide-angle function for the best result. You can find this beautiful look-up at Carrer de Milans.

One of the most Instagrammable hotels in Barcelona is Cotton House Hotel. It has a beautiful restaurant on the first floor, you can see the interior here. The restaurant has black and white tiles on the floor, some wooden accents and many plants. It also has a part across the hall that feels like the living room of an English mansion with comfortable armchairs and big bookshelves. And the Cotton House Hotel also has one of the prettiest spiral staircases in Barcelona. The black and white checkered floor adds an extra ‘Alice in Wonderland’ effect!

This former school now houses the Barcelona City Council, but the most Instagrammable spot of the premesis, this one, is easy to visit. It’s open to the public and often not crowded at all. So you can use your wide-angle function again for this Instagram-worthy picture.

This is a real secret spot in Barcelona! You’ll never guess that this is inside if you see the building from the outside. From the outside it’s a boring, gray office building. Even when you enter the building, you probably still think you’re at the wrong place as you’ll see a few counters that are just as boring and gray. The secret is that you’ll have to take the elevator on your left and follow the signs for ‘library’. The library was build in 1883 commissioned by Pau Casades, hence the name Palau Casades. You can find this hidden spot at C/ de Mallorca in Eixample.

On top of one of the hills surrounding Barcelona, you can find this very Instagrammable amusement park called Tibidabo. There are two parts, the platform you see pictured and the amusement park itself. The panoramic area that you see on the photo is free to visit. From here you’ve got beautiful views over the city. And the colorful attractions make a nice Instagram picture too.

Tibidabo is the name of the hill, the amusement park and this church. It took 60 years to build the church, from 1902 to 1962. You can visit the church for free and also go to one of its platforms. Only for the highest platform you’ll have to pay a 5,- entrance fee.

One of the prettiest stores I’ve ever been at is Cereria Subirà, a candle store in the Gothic quarter. With its black and white checkered floor and the beautiful stairs in the middle it’s super picturesque. The company has been making candles since 1761, their first shop was torn down as were many buildings in the old town. This store was build in 1847 as a clothes shop. They didn’t change the interior much when the start the candle shop here. So the stairs and the two female bodies that hold lamps were remaining from the clothes shop. Besides being a very pretty shop, they also sell candles in hundreds of colors and shapes, so it’s really worth a visit!

Around the corner from the Subira candle shop and close to the Cathedral of Barcelona, you can find Palau del Lloctinent. This courtyard is a bit tucked away, so even though it’s in the middle of a touristic area, not many people know about it. The yellow colors, and the absence of many tourists, make it a great Instagram spot in Barcelona.

Palau Dalmases is a beautiful 17th century Palace. It’s been completely renovated, but still has the original feel to it. In the evenings you can watch flamenco shows here. The palace makes a great background for the talented performers. During the day you can just walk in this pretty courtyard of the Palau Dalmases (opposite the MOCO museum).

Probably the most photographed building in Barcelona: Sagrada Familia. The best picture spot at Sagrada Familia is the ‘look up’, where you put your phone on selfie mode and take a picture of the ceiling. The symmetry is amazing and very Instagrammable. If you don’t know what you’re looking at, it’s almost mesmerizing. Another photogenic spot at Sagrada Familia is when the sun shines through the colored windows in the afternoon. They create a rainbow of color inside.

This colorful bar in a small alley is very Instagrammable if you ask me. The colored lights, the party flags and the red entrance make a nice picture on your Instagram feed. The bar is called El Calljon and you can find it at Carrer Ample in Ciutat Vella neighborhood.

It looks like a location of a Wes Anderson movie; this former palace. Pedralbes Royal Palace is located in a lovely small park. Get out at subway stop Palau Reial and you’ll see the park immediately.

The old part of Barcelona, Ciutat Vella, has some very Instagrammable streets. The old town consists of the neighborhoods Raval, Gothica and El Born. They are great neighborhoods to just stroll around in and visit one of the many shops, restaurants or bars. And don’t forget to have your phone handy to take some pictures!

Bishop’s Bridge, or El Pont de Bisbe, is a crossing between two buildings. It’s located in the Gothic Quarter also known as Gothica. The marble bridge was buit in 1929, connecting two buildings that already existed.

Click here for my vegetarian food guide to Barcelona.